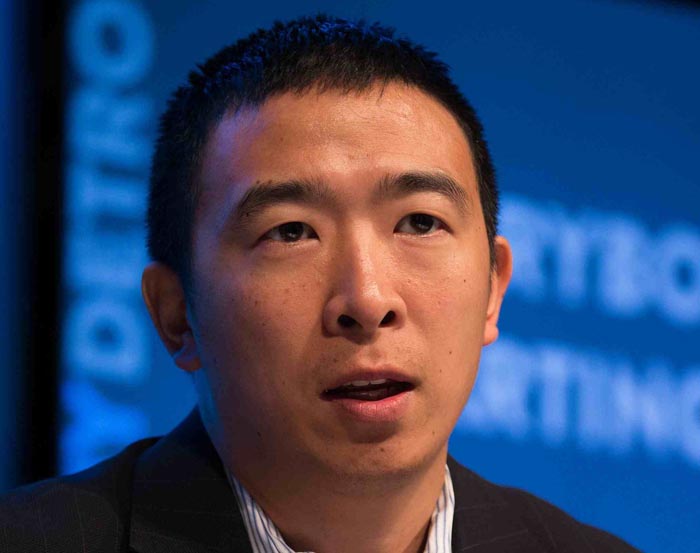 I’m one of the 47 Democrats running for president, the Asian one named Yang. Not that one, the other Asian. The one who’s trying to bribe everyone into voting for me. One grand a month free and easy, yo, from the Yang Dog. That’s what they used to call me in my hood in Schenectady. It’s a little town in Upstate NY. There’s a rose garden and an old-timey movie theater and absolutely nothing else. That’s why I had to choose the thug life. To get some respect, yo.

First, I have a confession to make. No one really used to call me the Yang Dog. I just made that up. I’m not even sure why. I thought it would make me sound cool. If you just add “Dog” to the end of your name, you’re cool. At least most of the time. I thought it would work for me, too, but it doesn’t.

Also, I’m not so sure this bribery thing is going to work. I’m absolutely serious about trying to do it, or at least promising to, and then completely failing to deliver, which I think everyone accepts, but it’s just too impossible to even pretend to believe. I don’t even believe it. People lose their homes when they get sick and now the government is just going to give them money? What a crock of shit, man.

Maybe I should just promise to take everyone’s money instead? I think they’d believe that, and they might even like the Yang Dog for telling it like it is. And this way, I could do a pilot program where everyone gives me a thousand dollars. When they see how great it works for the Yang Dog, they’ll be totally down. I know that’s a lot more money than $1000 a month, but it could still work because we’d only have to pay each person once. First, we all pay the Yang Dog. Then we go in reverse alphabetical order from there. If your name comes after Yang, fuck you. The Yang Dog just saved everyone else in the alphabet. I can’t save everyone.

One last question–am I gay? I just googled myself and apparently I’m married? Damn, yo. That’s some Asian honey right there. But my chances of being president might have been better if I was gay like that other guy. I think there’s just one gay guy.

Hey! I just looked it up and there’s only one Asian guy, too. That other guy must have been me in a mirror. Asians are really hard to tell apart, yo, even for us.

I don’t know what you’re babbling on about now—it must just be the disappointment over your performance at the debate. But you gotta shake it off, man, and get back out there. The American people need you. So the corporate thugs as NBC turned your mic off and wouldn’t let you speak. Welcome to the shit show that is the DNC and the mainstream media. If you ever thought they were going to play fair, you now know the score. Take it as a compliment. They did the same thing to Bernie in 2016 at the height of Berniemania. Nobody was calling it Berniemania at the time, but they should have. In spite of all the work the DNC put into slowing down Bernie’s momentum, he still managed to inspire millions of people to vote for Jill Stein. But really, you’re the opposite of Bernie and most of those other blow-hards. You’re measured, calm and thoughtful, and you answer the actual question that is asked. In your case, it really was only one question. Which is fine because you only have one answer to every question anyway: Freedom Dividend, free money for everyone, blah, blah, blah. It’s not your specific policies people care about; it’s your approach. You do research, look at data and consider all the options. It’s strange but refreshing, and it gives people hope that maybe someday rational thought will make a comeback.

I saw that you met the grassroots fundraising threshold to qualify for the second debate. Kudos—that means you’ve got another chance at this. I suggest you stay the course. Continue to refrain from yelling while others are talking. Avoid slinging mud at the old white guys who are probably going to win. Nod politely when that batshit author lady spouts her hippy nonsense about clobbering Donald Trump with rainbows or whatever. People will notice the guy in the corner everyone else is ignoring—the one who rises above all the nonsense. The only way to truly win this kind of debate is by being the least annoying person in the room.

I just donated to your campaign. It felt a little bit like when a member of a cult doubles down on their faith even after the aliens are a no-show and the prophet fails to deliver on his doomsday prophecy.

I saw that Fox News article where they discussed your mic troubles. Mostly, Fox is just trying to discredit NBC and the DNC, but the publicity is still a win for you. You’re in the unique position of being the conservatives’ favorite Democratic candidate this year, just like Bernie was in 2016. In reality, they hated Bernie, and they don’t really like you either. But they recognize in you the potential to knock the Democratic establishment off-kilter, to be the wrench in the gears of their platform. They count on your campaign to make voters distrust the party and either vote for a 3rd party candidate or stay home altogether. So far it’s working. But the field is so crowded that they might not even need you to fulfill your role. Most likely, all of you will cancel each other out.

On a side note, have you seen how racist the comments are on that Fox News article? It’s shocking even by regular Fox News standards.

Of course, if you really want the nomination, there’s a way I can make it happen. All it will cost you is your sole.

That’s right—I just want you to take me out to dinner at Legal Seafood. Believe me, I’ve got plenty of souls. All 24 of the other candidates (plus 10 more that haven’t even announced their candidacies yet) have offered me their souls in exchange for the Democratic nomination. Now, there can obviously be only one winner, but since they approached me and not the other way around, I’m under no obligation to deliver on my end. Which basically means free souls for me. To be honest, most of those souls were bland and tasteless anyway, so I don’t feel guilty for stiffing them. But since they all paid an equal price for the prize, I don’t think it’s fair to give it to any one of them. So the nomination is still available. And, I’m not sure why, but I’ve been really craving seafood lately. At Legal Seafood, they’ve got this Lemon Caper Grey Sole they serve with jasmine rice and spinach, and it’s to die for. So what do you say? Do you want to be the 2020 Democratic nominee for President of the United States and have one of the best meals of your entire life?

Disclaimer: If you’ll notice, nobody is even asking for anything beyond the party nomination, nor have I offered it. That is because none you have a shot in Hell at beating Trump, no matter what I do.