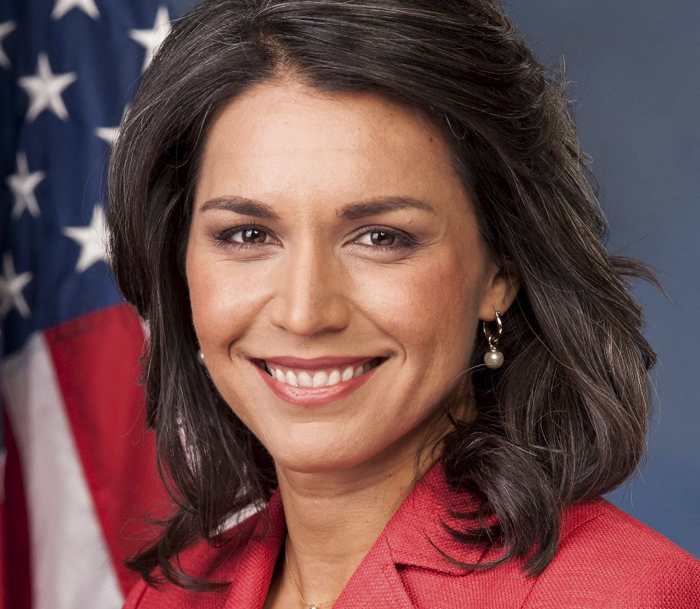 Today is International Women’s Day (in the middle of Women’s History month), and I’m wondering why the hell the whole country keeps saying that there are no women left in the 2020 presidential race. Sure, I’m hanging on by a thread, but I’m still here, dammit. At least for now.

I made a lot of enemies when I kicked Kamala Harris’s ass on the debate stage over her social justice failures, and then I further enraged the party when I dared to fight Hillary Clinton after she called me a Russian asset. The Democratic establishment doesn’t like it when people call them out on their bullshit, and the lamestream media is more than willing to go along with whatever narrative the elites put forward. Maybe I should have played nice in the beginning. Maybe I should have waited until I had more support before taking the gloves off, but that’s not me. I’m scrappy. I’m a fighter. If feathers need ruffling, I’m the one who ruffles them. Still, I wish I had more allies.

I earned 2 delegates on Super Tuesday, which should qualify me for the next debate, but the DNC decided to change the rules to keep me out of the way. My plea for fair treatment has been ignored by everyone, including Bernie Sanders. Given his own struggles with the party, I was expecting some solidarity. Even Andrew Yang seems to have hung me out to dry. He promised his full support to any candidate who backed Universal Basic Income. I did exactly that, but I haven’t heard a peep from him. I thought we were pals.

I am a veteran and a woman of color who surfs and plays capoeira. I’m young, strong and full of passion—like AOC, only more sensible. My message is resonating with voters the Democrats gave up on a long time ago and I’m winning over many former Trumpers. Aren’t we supposed to be the anti-war party? Aren’t we supposed to be the party that fights for working people? Uncle Joe is senile and completely out of touch. Bernie means well, but his ideas are dated and impractical. I am the only candidate who has a shot in hell at beating Trump, yet nobody seems to realize this. My campaign is stuck in the mud and it’s getting hard to justify taking money from supporters. Is there anything I can do to turn things around?

There’s not much you can do that you’re not already doing. The system is rigged against you, and it doesn’t look like that will change anytime soon. But don’t give up. Win or lose, the work you are doing is important. You’re exposing the hypocrisy and corruption of the establishment and you’re building a movement that will continue long after this shit show of a presidential election is behind us.

While fighting the good fight, it is important to stay positive. Too much anger and cynicism could lead you to the dark side. It’s good that you go on Fox News and speak truth to power, but don’t let yourself become one of them. You have some anti-LGBTQ skeletons in your closet that has some people on the right licking their chops, hoping they can convert you into one of their hate-spewing minions. You’re supposed to be changing their minds, not the other way around. Anderson Cooper called you out on this; don’t give him the satisfaction of proving him right.

—Jesus Christ
p.s. For what it’s worth, I voted for you on Divine Tuesday last week, as did millions of others up here in Heaven. Unfortunately, the DNC refuses to count our delegates, insisting that celestial beings and dead people can’t vote. They have a point, I guess. Still, I think they’re being assholes.

Confession: despite being thousands of years your senior, I have something of a schoolboy crush on you. I know it’s inappropriate to talk about your appearance but fuck it—I’m the Devil, and I’m not exactly known for being PC. You are a very strong, talented women working tirelessly on behalf of your fellow Americans. You also happen to be hot as fuck. I can see why it might seem disrespectful to bring it up, but the truth is your looks are a legitimate asset when it comes to dealing with Trump and his posse. Think about it. He’s such a loathsome misogynist that he only respects women if they’re pretty. You’re hotter than Melania and you’re hotter than Ivanka, the two most important women in his life. He doesn’t exactly respect either of them, but he does put them on pedestals—especially his daughter. Now, what do you think happens on the debate stage when he ogles you and you just stare him down and refuse to put up with his shit? My guess is he’ll slink away with his tail between his legs. After that, I believe you’ll cruise to victory.

When it comes to dealing with your enemies, well you just leave them to me. In fact, retribution against Hillary has already begun for her earlier offenses totally unrelated to what she did to you. Remember those rumors about her pizza party sex trafficking ring? I started those. I know that’s not playing fair, but I’m the Devil and she deserves it. I’ve also turned her feet into duck flippers and cemented her asshole shut. Then, when she dies and finally comes down to Hell, I’m going smash the concrete with a sledgehammer and cram cobras up there. That’s just for starters. If you have any ideas for other possible Hillary tortures, I’m all ears. As for Kamala Harris, her punishment will involve being sewn to Joe Biden ass-to-mouth in a sixty-nining human centipede configuration. Then I’m going to use them as one of the wheels on my monster truck and drive over piles of human skulls in a giant shit pit.