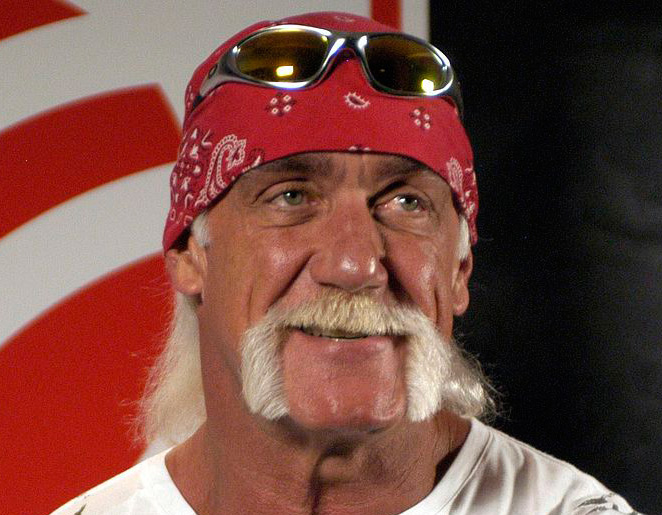 I’ve always been true to my Hulkamaniacs, sticking to the Four Demandments: train hard, say your prayers, take your vitamins, and always believe in yourself. All of my success—both inside and outside the squared circle—depended on me following these rules. But something has just happened that is causing me to question everything. Yesterday, I saw The Fate of the Furious at the local multiplex. It was an IMAX 3-D version on the biggest screen in LA, and it was awesome. Definitely the best movie I’ve seen since Babe II: Pig in the City. Anyway, last night I had a very upsetting dream about Dwayne “The Rock” Johnson in which he was pounding my asshole with his huge cock, all the while yelling “Smell what The Rock is cookin! Smell what The Rock is cookin!” When I woke up this morning I was covered in my own jizz. And if having an erotic dream about a fellow wrestler wasn’t bad enough, I happened to get some of my nocturnal emission on the woman sharing the bed with me—Kelleyanne Conway. When she woke up and found the sticky stuff on her ass cheek, she assumed I had jerked off on her while she was sleeping. Of course I would never do that kind of thing! But what she seemed most upset about was that she had tried to seduce me as we were going to sleep, and I told her I was too tired. She seemed very hurt by this. So, in her mind, I had rejected her only to jizz on her later without her permission. But that’s not what happened! I really WAS just too tired to fuck an old blond lady with shoulders bigger than my own. Also, the truth is, I was already having confusing feelings about The Rock.

Jesus, Satan…what should I do? Should I come clean with Kelleyanne and apologize? Should I tell The Rock how I feel about him? I’m worried he might not be very receptive, after all that racist stuff I said in that video. But then again, the video also shows how gigantic my cock is, so maybe he’ll be into it. What do you think? Do I have a shot with him? I’ve been watching our match from WrestleMania 18 on Youtube all day. The two of us in our prime—sweaty, rolling around in front of thousands of screaming fans…I just can’t stop thinking about him, brother.

For most of your career, you were a model Christian. In public at, least, but that’s all I care about (what happens in a men’s bathroom stall stays in a men’s bathroom stall, as long as you’re a Republican). I’m sad to see that now, after all these years; you’re starting to lose your way. Of course, I can’t condone a relationship between you and The Rock on account of all that stuff I wrote in Leviticus. People still believe that shit, and I don’t want to come across as weak by flip-flopping on it. So no Brokeback times for you. Not in real life, anyway. I’ll give you a pass for the naughty thoughts that occur while you’re sleeping because you can’t help that.

To be honest, I don’t think you really have a chance with The Rock anyway. That racist stuff is going to be pretty hard to come back from. More importantly, The Rock is way out of your league. He’s like 20 years younger than you, and looks 80 years younger. Your face looks like you took a quick peek while someone was opening The Ark of the Covenant. Meanwhile, The Rock is chiseled perfection. I’ll let you in on a little secret: The Greek myths are real. Hercules exists and he looks exactly like Dwayne “The Rock” Johnson. That’s probably the best bit of casting Hollywood has ever done. So save yourself the humiliation and keep your feelings for Dwayne to yourself. As for Kelleyanne, you leave her to me. She’s an adulterous whore who will soon get what’s coming to her. Hint: It involves cobras and orifices.

Uh, I’m not sure you can really say you were in your prime at WresleMania 18. Yeah, you went over unexpectedly well with the crowd and the ending of the match had to be changed on the fly to reflect this, but The Rock really carried that match. You never had the technical wrestling chops to hang with the guys in The Attitude Era, and that’s fine. Your strength was your charisma. You cut a promo like nobody’s business. Even The Rock couldn’t compete with you in that regard. Sure he’s way better looking than you and a much better actor and technical wrestler, but his gimmick was much easier to pull off. You were the last pure babyface who was in any way interesting. It was probably all the cocaine, but you were insane and it was fun. What I’m getting at here is, you still have that charisma. A bit less so after all that racist stuff, but I still think you have enough of that old Hulkster magic to charm your way into The Rock’s speedos. Anyway, it’s worth a shot, right? You’re 63 years old and lucky to be alive. Your peers from the 80’s are dropping like flies all around you, meanwhile you’re body’s cratered from steroid abuse, you’re face looks like a Tim Burton creation and your back is so fucked up that you have to sit down to brush your teeth. What do you have to lose? Your dick still works, you may as well use it.