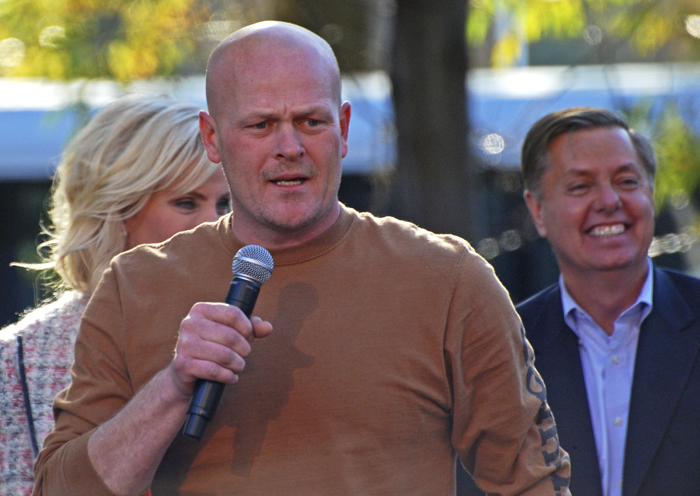 Hi guys, it’s me, Joe the Plumber. Remember me? Technically, I’m not a real plumber (damn socialists wanting licenses for everything), but I got Obama to admit he was a communist and got Trump into office, at least as far as I see it.

Maybe it wasn’t exactly me, but it was guys like me. Simple, working-class guys who see a white guy in a suit with a hot wife and think “That there guy is a winner!”

You’d think guys like me would hate 80’s type businessmen like Trump, but the movie Wall Street, written and directed by Oliver Stone, who’s a genius by the way, showed me what was what.

Inside every 80’s businessman is a blue-collar guy just like me whose pappa got screwed by the system. And since you can’t beat the system, you join it, and then covertly beat it from within, and that’s exactly what Trump has been up to all along. Most Americans see a babbling, incoherent, incompetent lunatic, but street smart guys like me see right through all of that. He’s got a plan, and he’s working it to perfection. Maybe I’m not exactly sure what that plan is, but I trust my gut, and my gut tells me Trump Trump Trump!

I’m not racist or sexist, or at least I don’t think I am, but I have a picture in my head of the President of the United States of America, and he’s an old white man in a suit. Always has been, always will be. Just like Jesus and Santa Claus are white, that’s just the way it is, like cats meow and dogs go woof. And there ain’t nothing racist about it.

I guess I don’t really have a question, but you know how it is. Every now and then, guys like me gotta turn up the volume while FOX News is on and puff our chests out, just to show y’all what’s what.

If there’s any way I can help President Trump, please let me know. I guess that’s my question.

To your question, if you want to help Trump win, write another book. This time make sure there’s a scene where Trump goes down on Oprah while Ellen DeGeneres jerks him off. That way he gets the black vote, the housewife vote and the gay vote all in one fell swoop. If you want to get the youth vote, replace Oprah with Beyoncé and Ellen DeGeneres with Ellen Page. Though, I guess if you do that, you’ll still be missing straight white middle-aged suburban women. You should probably write both scenes, just to make sure you cover all your bases.

The only advice I can give you is to stop sitting on the handle of your plunger. You have no idea how many curious pubescent young men meet their end this way every year. It’s the 356th most humiliating way to die and the 45th most painful sodomy-related way to die. If you want to experiment with butt stuff, just be honest with yourself and find a human male to have consensual sex with. If you’re not ready to admit you’re gay, that’s fine. Plenty of straight men have anal sex with each other. Those men are called “Republicans,” and I’m pretty sure you already know a few of them. In fact I think, come Election Day, you should take a trip to visit Lindsey Graham in South Carolina and just “be there” for him. If he wins his election, you two can celebrate, and if he loses, you can comfort him. I just think the two of you would really hit it off, you know? Not in a gay way, of course, just, you know… as two buds hanging out listening to Blake Shelton music, watching NASCAR, and occasionally drilling each other’s assholes.