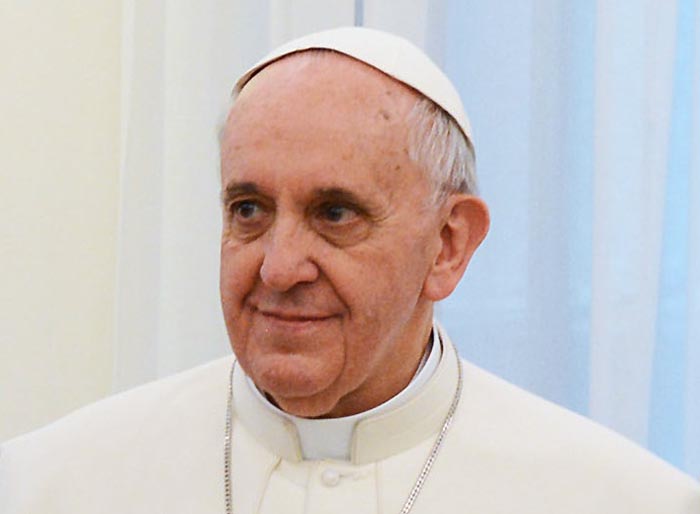 It’s me, Pope Francis, your infallible representative here on earth.

I think it’s safe to say I’m the best Pope ever, or at the very least the second best, right behind the Beatle Pope of the 80s, Pope John Paul Ringo II. What a Pope!

Anyway, down to brass tacks. We all know that women can’t be priests. The church has spoken. It’s kind of strange for me to base my answer on what the church says, since I am the church! I love screaming that line at people. It’s like Emperor Palpatine sneering “I am the senate!” or Judge Dredd growling “I am the law!” That’s kind of how I see myself, like a combination of Emperor Palpatine and Judge Dredd. I pull all the strings, and am judge, jury, and executioner all in one. Priests can be married, but Bishops must remain celibate. Why? Because I say so, that’s why! (Bishop Baker beat me at Rock, Paper, Scissors, (we were playing for a prize hog that had won the county fair), and I told him he’d live to regret it. Enjoy your bacon, Bishop Baker, while being celibate for the rest of your life.)

We all know that the gays can’t be married, but what about dogs? Not gay dogs, obviously, as homosexuality is an abomination, but as long as the dogs have been baptized and are practicing Catholics, why not? Why shouldn’t dogs be entitled to all of the joys (and miseries) of marriage?

I also believe that dogs should be allowed to be priests. Technically, there’s nothing in the scriptures against it, and it would really piss women off. Imagine a congregation of women being barked at by a dog in robes. This is something I have to make happen.

What is your guidance, my master? And if you’re okay with the dogs, what do you think about other animals becoming Priests and Bishops? I’d love to make a baboon a Bishop. As far as making sure the baboon remains celibate, all we’d have to do is castrate him, which I’d be more than happy to do.

Actually, what if I met you halfway? I’ve always hoped that someday, there’d be werewolf priests—let’s finally make it happen. Only heterosexual male werewolves, of course. Though, now that I think about it, you know what would be really hot? A lady dracula priestess. Yeah, I like that. So make a little amendment to the “no girls allowed” policy. And while we’re at it, I think male frankensteins would make good nuns. And from now on, let’s have only creature-from-the-black-lagoon alter boys. That oughta keep those pee-pee-touching, non-lady-dracula priests from touching pee-pees. I mean you don’t wanna try to touch a creature from the black lagoon’s pee-pee, believe me. They bite! Or maybe mummy alter boys. No priest is going to take the time to unwrap all those bandages. That’d be way more trouble than it’s worth.

To be honest, I’m bored with Catholicism. At least the Evangelicals are so ignorant that they’re entertaining. Catholics are just depressing. For the longest time I thought the answer was to modernize everything, but now I realize we need to do the opposite. Bring back that creepy Transylvania shit, with the blood lust and the people turning into bats and impaling the enemies of the church on pikes outside of castles. That was the Golden Age of Catholicism. Go back to that, and nobody will worry about birth control or gay marriage or priest pedophilia—they’ll be too worried about being accused of witchcraft and burned at the stake.

I’ve met Emperor Palpatine, and you, sir, are no Palpatine. I mean, can you even shoot lightning out of your hands? No. And I’ve heard your evil cackle—not very intimidating. But if being an evil overlord is important to you, I can make it happen. For over 2,000 years, I’ve been offering amazing deals to popes just like you. Why? Because nothing is more delicious that fillet of Pope soul. Seriously, every single one of your predecessors is down here. Haven’t you read Dante’s Inferno? Anyway, sell me your soul and I’ll turn you in to a legit super villain. You want to shoot lightning or fireballs? Done. Glowing red eyes? You got it. Telekinesis? Why the fuck not. You’re probably coming to Hell anyway for not cracking down harder on the pedophilia, so what do you have to lose? At least this way you get the powers. Sure, you’ll no longer be considered the “nice” pope, but does that really matter? Any non-Catholic already realizes you only seem progressive and compassionate because of how low the bar has been set. Compared to most of the other popes, you’re freakin’ Mother Teresa. Actually…bad example—she’s down here with me, too. The point is, you’re not as cool as people like to believe. You still oppose abortion for woman who are raped or victims of incest. You still would rather people die of AIDS than use condoms.

So what do you say? Isn’t it time for you to embrace your inner demon? Act now, and I’ll throw in a cure for your erectile dysfunction and triple the size of your secret papal brothel.