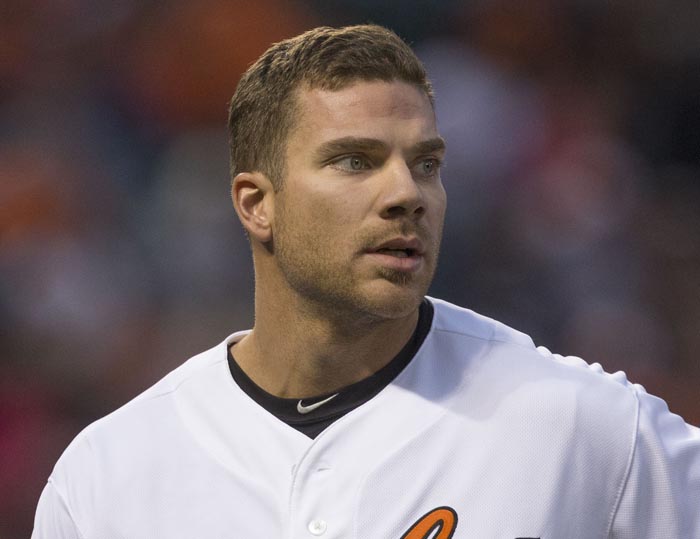 I play Major League Baseball for the Baltimore Orioles, so you’ve probably never heard of me, and if you have, well, it’s probably because I kind of stink lately.

I’m in an 0 for 53 slump, which is historically bad. Like literally historically the worst ever except for pitchers, but pitchers aren’t really people. They’re actually more like fascists or monsters, unholy sub-human monsters who keep throwing baseballs at me really hard, and I can’t hit them. I’m powerless to hit them.

They won’t bench me because they’re paying me too much. It’s great having all that money, but I really wish they’d just bench me. The best part of playing baseball is all the sitting involved. This is why I chose baseball over more demanding sports like ping pong or dominos.

I really need some help, and I’m willing to do whatever it takes. My soul, my wife, my daughter, whatever, but not for just one measly hit. Well for my wife, fine, but for my soul or my daughter, I want to be batting .290 by the end of the season with 25 home runs, 90 RBIs, and a 3 WAR minimum. I’d ask to win the World Series, too, but I know that there are limits, even for you guys.

Thanks in advance,
Chris Davis

It looks like, in spite of your recent performance against The Red Sox, you’re still the worst batter in the league. I don’t usually like to tell people about the future, but your streak (which you extended to 0-54 before finally getting a hit today) will never be broken, though you yourself will have streaks of 0-41 and 0-51 before you finally retire. When will that be? You haven’t made up your mind yet, but I know. And the reason you’ll finally call it quits has nothing to do with baseball, I can tell you that. You’re going to accidentally kill a hooker, then purposely kill another hooker because she saw you burying the first one. You’ll have a good enough lawyer to keep you out of jail, but the scandal will permanently ruin your already toddler-like focus to a point where you can’t even swing the bat until after the ump has called the strike. The lawyers’ fees will drain whatever money you had left after your wife leaves you, and you’re going to die drunk and penniless in a Baltimore gutter, like my hero Edgar Allen Poe.

Congrats again on that record-setting slump.

Things don’t have to go down the way they’re currently slated to. I can still help you turn it all around. Getting those 3 hits to break your slump in that game against the Red Sox was just a taste of what could be if you make a deal with me. Will you hit over 50 home runs in a season again? No—that would make people suspicious. And honestly, your soul isn’t worth a 50-home run season. Or even 25, probably. If you pile on the souls of your wife and children, I can probably get you up to 20, though. That would be something, wouldn’t it? Vegas odds suggest you need at least one more season of 20 or more home runs and/or keep your batting average over .205 to prevent the downward spiral that would lead to the hooker murders. If you want to take your chances without my help, be my guest.

Oh, and I think it goes without saying: Winning the World Series is off the table. You just don’t have enough to offer.