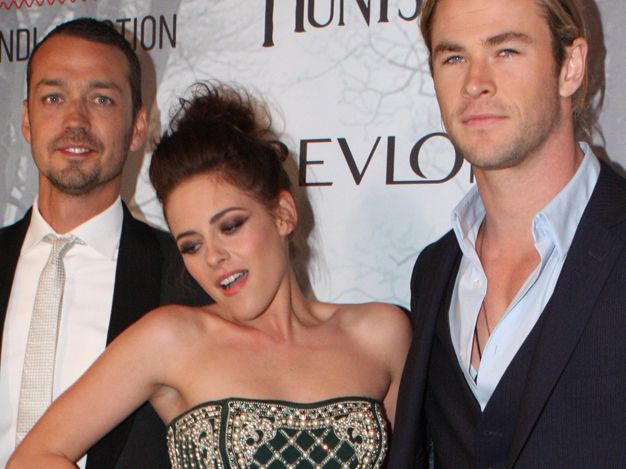 I’ve done something horrible and I don’t know what to do about it. While working on the forgettable movie Snow White and the Huntsman, I cheated on my boyfriend Robert Pattinson with married director Rupert Sanders. We got drunk and I let him fuck my brains out. It was fun at the time, but afterwards I felt really guilty. I made a public apology to Robert, and he’s agreed to give me one more chance, but I can tell I’ll never fully regain his trust. Also, now I sort of want to fuck Thor, my co-star in Snow White and the Huntsman. I probably shouldn’t, though, right? I mean Thor’s married, too. What do you guys think?

Unless you’re a U.S. Congressman, adultery is one of those things I come down pretty hard on. Now I know you and Robert weren’t married, but cheating is cheating. Come to think of it, you were already committing adultery by fucking Robert out of wedlock. Boy, you’re quite the little whore, aren’t you? And then you went and seduced poor Rupert with your evil female seductress powers that were impossible for him to resist. I mean what did you expect him to do? Men just can’t help themselves and you took advantage of that. You leave me no choice but to increase the pain of your monthly menstruation by 35% for the next ten years. I’m sorry—I try to be a merciful God, really I do, but you slutty women just make it so damn hard. Anyway, I hope you’ve learned your lesson.

You made your apology and Robert took you back. Count yourself lucky. But in the eyes of the public, you’re still a whore. Frankly, though, that’s not why they hate you. They hate you because you’re not pretty, you have an annoyingly bland acting style and your severe case of Resting Bitch Face makes people want to slap the shit out of you. As I see it, there’s only one thing you can do to win people over: become a lesbian. It’s really hard to be mad at lesbians these days, so you might as well use that to your advantage. It’s your only chance. I know you don’t want to hurt Robert again, but look at it this way—if you break up with him, he’ll finally get to date someone as hot as he is. I mean seriously, he’s so out of your league that I’ve been wondering if he might actually be blind or gay. So cut the guy loose, then go lick a vagina, and you’re life will instantly get a million times better. I promise.