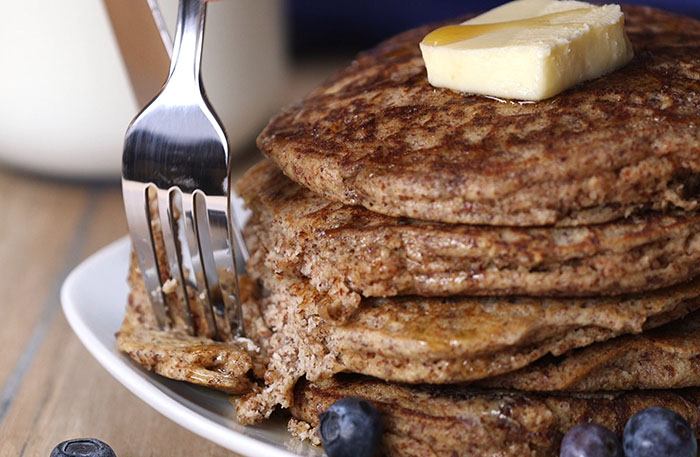 I know what some of you are thinking: “Pancakes are fine, but they suck compared to French toast and waffles.” Well, just chill the fuck out, ok? I’ll be talking about all three of these amazing foods because they’re all fucking awesome.

Rise Above the Competition
The fact is, 90% of the pancakes out there are total garbage. They’re either too dry, too spongy, or too mushy. If someone’s idea of pancakes is those nasty yellow discs they serve at McDonald’s, then, yeah, of course, they’re going to hate pancakes. Even the ones at IHOP are disappointing, and that’s supposed to be their specialty. I guess there’s a reason nobody calls the restaurant by its full name anymore.

To be honest, I never order pancakes at any restaurant, and that’s because the pancakes I make at home are way better than any other ones I’ve come across so far. Maybe that sounds like bragging, but I know what I look for in a pancake, and when I’m in charge, I can make sure that’s what I get. After years of searching, I eventually found the perfect recipe for thick, fluffy pancakes that are so good, you could eat them without syrup. I would never do that, but you could. The recipe I use every Sunday (unless I’m making waffles)

The secret is simple: Extra baking powder. I like my pancakes to be golden clouds of happiness and the way to achieve that is by leavening the hell out of them. I also don’t use as much liquid, making the batter so thick that it’s practically dough, and you have to manually spread it on the pan. Of course, the consistency varies with the type of pancake. For example, pumpkin pancakes have more liquid than other kinds, so the dough is wetter, and they don’t rise as much. Recently, I cooked the pumpkin puree first to remove the excess water, and that made them a little airier. I also ran out of buttermilk that time, so I added ricotta cheese. They came out good. For the last year or so, I’ve been using organic extra virgin coconut oil instead of butter, and I like what this does to the flavor. [Pro tip: if you live in a cold climate, you have to nuke the coconut oil for a minute or so, because it’s solid at temperatures below 76F, which makes it hard to stir into the mix.]

Crêpes
I know they’re popular, but if you ask me, crêpes are just pancakes that need Viagra. It’s like a vampire came along and sucked all of the life force out of them. Sure, if you stuff anything with fresh fruit and cover it with whipped cream and chocolate sauce, it’ll be edible, but is that really enough? I don’t think so.

Waffles
Restaurants usually do a pretty good job with these, but they’re so fun to make at home that I rarely order them when I’m dining out. The chemistry involved in making them light and crispy is very precise, so I don’t fuck around with the recipe, and do exactly what is written on the page. Making waffles isn’t the Improv Olympics; if you try to “yes, and” those suckers, you’ll probably ruin them. I’ve also found that adding nuts or chopped bananas to the batter makes my waffle iron angry and a pain in the ass to clean. If you want to be creative with waffles, save it for post-production and add stuff after they’re cooked. I personally like topping them with peanut butter, chopped bananas, and syrup.

If you’re feeling especially adventurous, there are recipes out there for “special” waffles. My favorite is eggnog. You have to use really good eggnog, though. For me, it’s Trader Joe’s full fat or nothing. I suppose it would be good with homemade eggnog, but that would be too much work. Be warned: there’s more to making eggnog waffles than just swapping out the buttermilk for eggnog. Those two liquids do very different things, so again, unless you’re a chemist, just follow the fuckin’ recipe.

Eggy Bread
That’s what they call French toast in England on account of their stupid rivalry with France. “Eggy bread” just sounds so idiotic, doesn’t it? It’s like they weren’t even trying. In all fairness, “French toast” isn’t really French. According to Wikipedia, the earliest recipe approximating what Sir Ian McKellen now thinks of as eggy bread was found in a 1st-century Roman cookbook. You can’t blame France for trying to take credit, though. They’re probably embarrassed about the crêpes.

Of the three breakfast superstars, French toast is the one I’m most likely to order at a restaurant because I’m no good at making it. I can never seem to summon up the courage to use what I think would be the necessary amount of egg. The idea of throwing in a half dozen per slice of bread is terrifying, and I suspect that’s the amount you need to make it as moist as I like it. And, since I’m pretty competent with pancakes and waffles, I just never want to take a chance with French toast.

When it comes to French toast, I’m definitely a snob. It has to be made with either Texas toast (whatever the hell that is) or challah, and slices have to be at least an inch thick after they’ve been soaked in egg. Anything less, and it deserves to be flushed down the toilet.

I’ve seen some places that use banana bread or croissants, but that’s just… that’s just too fuckin’ much, you know?

Syrup That Comes From an Actual Tree
Long before the world knew Paula Deen was a racist, I learned exactly what kind of person she was during an episode of her show, when one of her recipes called for maples syrup and she proceeded to grab a bottle of Log Cabin from the cupboard. The only thing that would have made it worse was if it was Mrs. Butterworth. I get that they don’t have maple trees in Georgia, but they do have Costco, where you can get a 32-oz jug of pure, organic Grade A maple syrup for $11.99. “Pancake syrup” is not maple syrup, and anyone calling themselves a chef should know that.

Corn syrup, water, sugar, salt, “natural flavor” (whatever the hell that is), sodium hexametaphosphate, sodium benzoate, sorbic acid, caramel color, phosphoric acid, mono, and diglycerides. According to the label on the bottle, those are the ingredients in Log Cabin syrup. As far as I’m concerned, anyone putting that on their pancakes, waffles, or French toast should be burned at the stake. Bernie Sanders works hard mining pure maple syrup from the trees in his home state of Vermont, so show him so goddamn respect. I literally have 12 of those 32-oz jugs in my house at all times, “just in case.” In case of what? I don’t know, supply chain issues from the Covid pandemic, inflation, climate catastrophe, or anything else that could suddenly drive up the price of my precious brown gold. Maple syrup is the most important staple of my end-of-the-world rations. I also make sure to have 15–20 lbs. of white whole wheat flour, two 64-oz jars of organic extra virgin coconut oil, plenty of sea salt, and several containers of baking powder and baking soda at all times. Sometimes I can’t get the buttermilk I like (it’s Kate’s or nothing), but in a pinch, I can use any kind of milk (even almond!) if I have to. Yogurt or ricotta cheese will work, also. The point is, don’t you fucking try to come between me and my pancakes. [Note: these substitutions apply to pancakes only. As I’ve been saying all along, there is to be no deviation from a waffle recipe. I have made my peace with the fact that an Apocalypse scenario probably means no more waffles.]

FYI, the so-called “International House of Pancakes” does not serve real maple syrup. I get that it’s more expensive, and I think it’s perfectly reasonable for restaurants outside of the Northeast USA and Canada to charge a little extra for it. But to not even offer it? There’s no fucking excuse.

Conclusion
Pancakes, French toast, and waffles are awesome. You might not like all three, but odds are you’ll like at least one of them. Try them all, try all different varieties, try them with all different toppings. One request: I know pure maples syrup isn’t available at every restaurant, but don’t say you don’t like pancakes, waffles, or French toast until you’ve tried them with the good stuff.