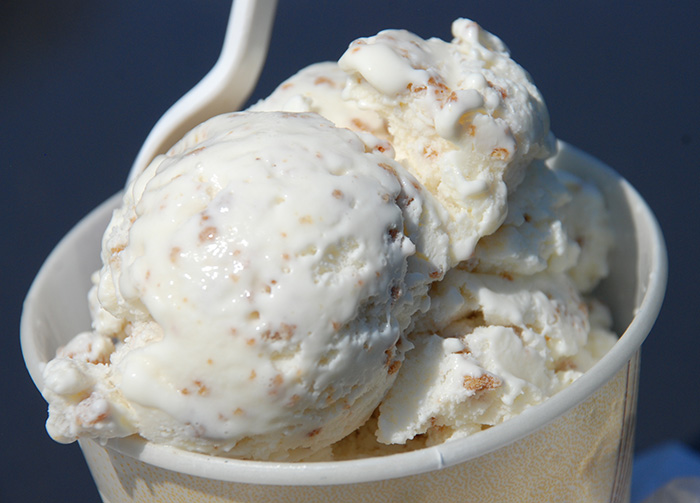 As batshit crazy as this might sound, I didn’t always love ice cream. It’s not that I disliked it, it’s just that I didn’t give much of a shit about it. I was always more of a cookie/brownie/ guy. Then one day, I realized cookies and brownies are way better if you throw some ice cream on top, and my whole life changed forever. Now, I eat cookie/brownie sundaes 4-5 times a week, which is probably a little too much fat and sugar for a 46-year-old man to be eating. But you only live once, right?

Truth be told, I’m a bit of an ice cream snob. I steer clear of the processed shit like Turkey Hill, Hood, and the generic store brands, though I could be persuaded to eat Breyer’s. Baskin-Robbins sucks ass. Ben & Jerry’s is ok, but I prefer local ice cream shops to any of the national chains. In Massachusetts, we have a place called J. P. Licks, which is pretty good. Really, though, 95% of the ice cream I consume is homemade.

For those of you considering making your own ice cream, you should know that it is a pretty expensive hobby. The prices of milk and sugar aren’t that bad, but heavy cream is ridiculous. Depending on where you live, it can easily cost up to $4 for a pint, which is the amount required for just one batch. To save money, I started buying it by the quart, which is how I came to consume so much ice cream. I’m making two batches every other week, which means there’s absolutely never a time that my freezer doesn’t contain at least two different flavors of the good stuff.

I typically stick to the three flavors I know I can pull off: mint, green tea, and chocolate. Chocolate is my favorite, so I make sure I never run out of it. I make it extra rich, with extravagantly fancy dark brown sugar and maple syrup. The fat content is so high that it barely freezes. It’s like eating really cold pudding. I stir in chunks of dark chocolate peanut butter cups (Trader Joe’s brand—none of that Reece’s shit), chopped up dark chocolate salted caramel bars, or bits of 60-70% cacao Lindt Lindor truffle balls. Also mini semi-sweet chocolate chips. Some say I put too much stuff in my ice cream, but these people don’t know what the hell they’re talking about. For the mint, I usually add chopped-up Andes Candies or crushed Thin Mint Girl Scout cookies. Both are good, but I actually prefer the candies to the cookies. I make the green tea for my wife, and she prefers it without stuff mixed in, but the other day I added salted caramel chips and it came out really good. I’ve tried peanut butter, pumpkin, and banana flavors, but the peanut butter is too hard and the pumpkin and banana have too much water content, so they always come out icy. I suppose I could stand to be more adventurous, but why mess with success?

I’ve been racking my brain trying to come up with a food that is better than ice cream, and I keep coming up empty. Sure, I’ll eat a plain cookie with no ice cream on top, but I won’t be happy about it. In rom-coms when someone gets dumped, it’s not cookies they stuff their face with. There’s a reason for that.

I know some people are vegan and/or lactose intolerant, but there really is “ice cream” out there for everyone. Trader Joe’s has a decent soy-based ice cream, for example. I once substituted coconut cream for all of the dairy in my chocolate ice cream, and it came out ok. The recipe needs some tweaking, and, to be honest, I haven’t wanted to put in the time and effort to get it right. Maybe someday. The point is, if you don’t like ice cream, then there’s something wrong with you, and you should probably consider talking to a psychiatrist.

Ice cream is the best.