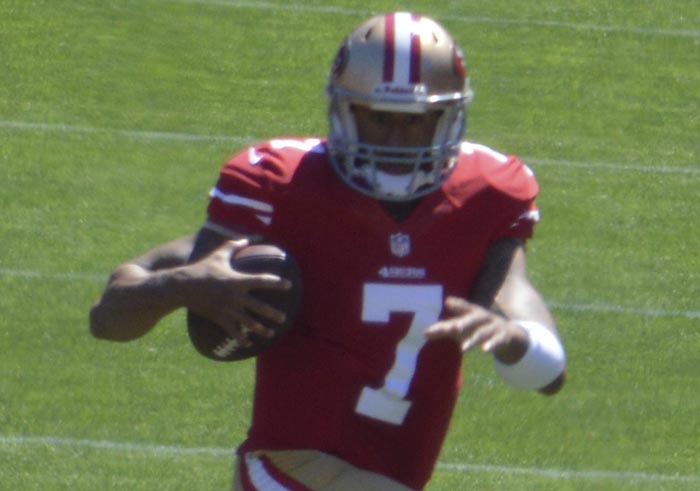 When it comes to protesting, we just can’t seem to get it right.

So for taking a peaceful knee before a football game, I humbly apologize.

When most Americans stand for the national anthem in front of 60,000 spectators before starting their shift, they don’t take a knee, no matter how much revenue they generate for the league or how little the league cares about issues directly impacting their communities. So if they can suck it up, I suppose I can, too.

These poor people already had to hear about minorities being brutalized on the news, and there I go making them think about it again on gameday? Haven’t they already suffered enough? Honestly, I don’t know what I was thinking.

Tens of thousands of veterans died defending our right to blindly worship a piece of cloth, and I should respect them by respecting that piece of cloth and just keeping my big trap shut. As a matter of fact, I should be grateful I’m even allowed to live in America.

Beating your wife is the kind of thing you can do off the football field. That way, it doesn’t really bother anyone. So the next time the police murder someone, I’ll just protest quietly in my basement. Because the entire point of protesting is to make sure you don’t upset anyone.

Any tips you could give me about how to protest “the right way” would be greatly appreciated. I was thinking I might open carry in front of a Walmart? I do kind of need a haircut.

NFL fans are idiots, I just don’t know what else to tell you. They don’t want to hear your message, so it doesn’t matter how you protest. Meanwhile Tim Tebow can run anti-abortion TV ads during games he’s playing in and nobody gives a shit.

If you ask me—and you did—professional sports are problematic in general. You guys may make millions of dollars (when you’re actually on a team) but you’re still owned by fat white guys in cowboy hats who visit “massage parlors” in Florida to fuck teenage girls. Sounds a lot like slavery to me, and I think it’s the only reason rednecks accept so many black people in their sports. And they’ve already made it clear they would rather boycott football altogether than listen to what you have to say. Of course they’re only willing to do that because they assume they’ll always have NASCAR. Yet even their faith in NASCAR has been shaken now that the organization has banned Confederate flags. In the end all these rednecks may be left with is their local high school sports, where even the basketball players are white.

The rednecks will hate you no matter what you do, but one way to fuck with them is to protest something they would agree with you about. In your very first game back, take a knee during the anthem like you usually do, and when you talk to the press afterwards, tell everyone you’re protesting social distancing mandates. If you do it with an AK-47 strapped to your chest, they may even believe you.

You could go back to the NFL, sign with some shitty team that just needs the publicity, or… you could start playing ice hockey and try out for an NHL team. Hear me out.

Sure, you’d be a 32-year-old rookie in a sport you’ve never played before (and probably never even watched on TV) on a team where you’d be the only black guy in a league that has been even more openly hostile to people kneeling during anthems than the NFL even though only 20% of the players are Americans anyway. But that’s exactly why you should do it.

Think of the impact you’d have. Hockey is the whitest sport in the world, not just because most of the players are white, but also because of all the ice. It’s just whiteness as far as the eye can see. And because the players are mostly Canadians or Russians, nobody will have any idea what you’re protesting about. Russian cops don’t shoot unarmed black men because there aren’t any black people in Russia and Canadian cops don’t shoot anyone because the Mounties only carry bb guns. Hockey fans will be much more open to your message than those of American sports because most of them aren’t as complicit in the societal causes of the issue and thus aren’t as defensive about it. Obviously, this isn’t true in Nashville or Raleigh or Phoenix or Dallas, but those cities shouldn’t have hockey teams anyway. And I know I said the league itself is even worse than the NFL, but I was mostly referring to the American coaches. One coach in particular, actually. John Tortorella, head coach of the Columbus Blue Jackets, said he would bench any player who took a knee during the anthem, but he was once fined 20 grand for being an asshole to a ref during a game. He’s basically Hans Gruber from Die Hard and everyone knows he’s a dick.

When it comes down to it, hockey isn’t all that different from football. Both sports are mostly just big guys smacking into each other and getting concussions, but in hockey, you can get into a real rule-sanctioned fistfight if someone pisses you off. Of course, you’d have to learn how to ice skate, but that’s no biggie. All you have to do is make a deal with me and you could be the next Jarome Iginla. I know you don’t know who the Hell that is but trust me—being the next Jarome Iginla of hockey is better than being the current Colin Kaepernick of football. At least you’ll get to play.