Divine Advice for Smokey the Bear 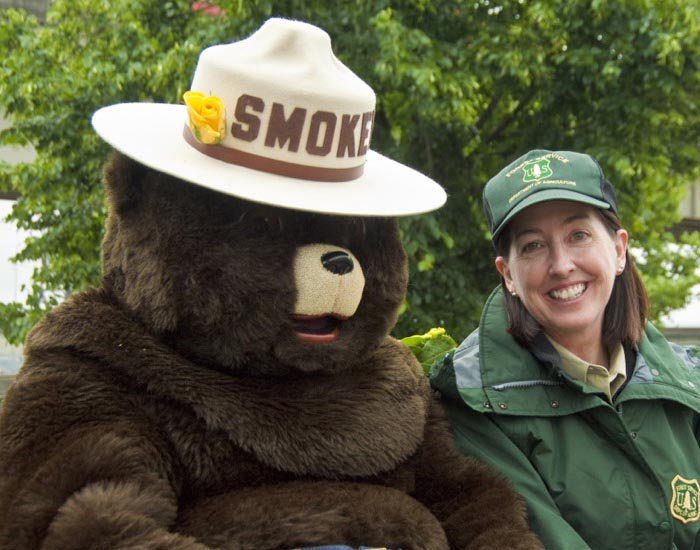 Fire is a mystery to everyone. Is it alive? Is it an element? Nobody knows.

When the US Forest Service picked me, I told them I was skeptical about my ability to prevent forest fires or even interact with humans at all in a non-confrontational way. Humans always come into the forest with food, and to bears, they’re kind of walking food to begin with. Our first impulse is to open them like fortune cookies and find out what’s inside. Maybe there’s fire inside of them, which I’m supposed to prevent.

It’s a big world out there, so I established a coalition of fire prevention bears. If one bear is good, more bears are better, right? Fozzie Bear was in charge of Australia, but I don’t know what happened to him. Judging from the news, I’d guess it was probably something fire-related.

Even if he’s still alive (who am I kidding?), everyone is going to blame me. I’m the figurehead bear, and it was my idea to put more bears in charge of fire, even though I never really felt qualified myself and was apparently right. There’s just so much fire, and I don’t even feel stressed out about it.

Like most Americans, I’m not even sure if Australia is real, but I would like to help anyway. What should I do? I’m afraid I might make things worse by accident, and looking at all that fire, what could I really do anyway? If I drilled a hole in Australia, maybe I could sink it, and the ocean would put it out?

Any advice would be appreciated,
Smokey the Bear

The truth is Australia is all Fozzie’s fault. He abandoned his post and went to New Zealand to do stand-up and fuck hookers, leaving Roobear Koala in charge of Australia. I told him that koalas aren’t actually bears and therefore aren’t qualified to prevent fires, but he wouldn’t listen. When everything went to shit, Fozzie faked his own death and has been hiding out in Singapore ever since. I know I should be furious, but I just can’t stay mad at the guy. Sure, he was selfish and lazy, but it’s not like he lit the fires himself. And you shouldn’t blame yourself either. You had a lot of positions to fill; it’s not like you had time to vet every single bear you hired. The Care Bears are the only ones that could have stopped this, as they’re basically the Jedi Knights of the bear world. Unfortunately, they were too busy battling Japanese whalers, Somali pirates, climate-change-denying American oil tycoons, and Professor Coldheart to lend a hand in Australia.

Going forward, I’m going to suggest a different animal to be in charge of fire prevention. It’s nothing personal; I just don’t think you’re a good fit. Actually, none of the animals that currently exist have what it takes, so I’m going to create a race of ice-breathing frost dragons. Not only could they fight the world’s fires, but they could also re-freeze the polar ice caps and reverse the effects of climate change, too. If they happen to wipe out the human race in the process, well that’s just one less thing I have to do myself.

I actually think you’re doing a bang-up job, though I am pretty biased. As far as I’m concerned, “on fire” should be the default state for forests, cities, rivers—everything, really. I sleep in a flaming bed, bathe every morning in a boiling cauldron and eat flaming Frosted Flakes for breakfast. Fire is my 3rd favorite thing, after promiscuous women and the anguished screams of sinners as I shove robotic cobras up their rectums. I love fire so much that I decided to convince Fozzie to leave his post so I could turn Australia into my new favorite vacation spot. I still need to make a few finishing touches. I’m thinking of creating a lava monster version of the kangaroo and a version of the box jellyfish that excretes hydrochloric acid. Anyway, thanks for your help. When you die and come to Hell, I’m making you my new chief of fire “safety.”