And I Never Saw Her Again

The Skull Island Times > Fiction > And I Never Saw Her Again 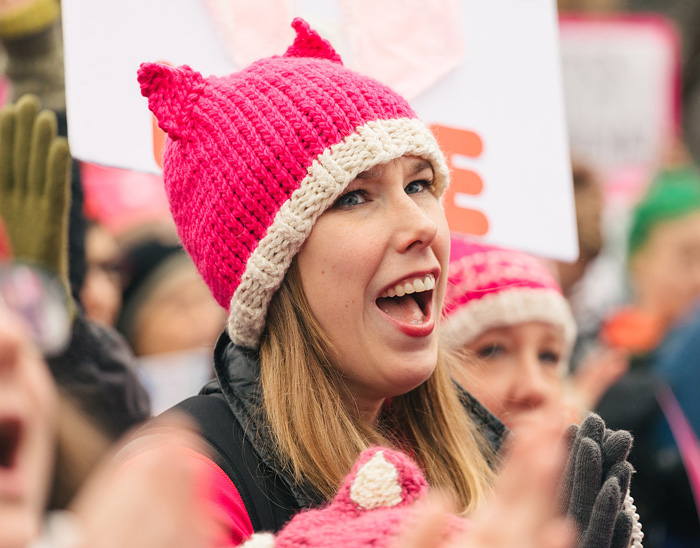 It was time to see the doctor again. Not that I went for regularly scheduled appointments, though whichever doctor I happened to see always told me that I should. This time, I was visiting because my right foot felt funny. These visits were usually pointless because after a certain age, the doctor always tells you that your foot feels funny because you’re old now. That it would be strange if you weren’t experiencing some sort of nagging pain or general discomfort. I kept going anyway because I thought that this time or that time might be different.

A girl in a pussyhat was sitting a couple of seats away from me. She was wearing tight grey jeans and a black t-shirt that said “The Future is Female.” She must have been in her mid twenties and it was very difficult for me not to look at her. Bums, garbage, strangers standing too close to me on the subway–most of my life was spent trying not to look at things, or at least to ignore them or give each other space. Nature compels us to look at beautiful girls, but you aren’t supposed to look at them, either, which somehow makes it even harder not to look.

She noticed me trying not to look at her and smirked. I felt torn between doing something and doing nothing. Usually, I did nothing. Did talking to beautiful girls ever work out for me? No, it did not. Not unless she was the one doing the talking. Every now and then, a beautiful woman needed a break from the type of man she might actually date or marry. These men wanted to be taken seriously because they were going places in life.

Men like this wonder why their boss hates them, so they work even harder at trying to get along, which is exactly why they’re so hateable. If you try to explain this to them, they’ll tell you that they don’t get it; that it doesn’t make any sense. What they’ve failed to understand is that nothing makes sense. If your boss hates you, for whatever reason (probably none and they probably don’t), you should try to avoid them. They might start to like you just for doing that.

They also fail to realize just how little they have to offer a beautiful woman (or anyone, really), and this gives them confidence. Men and women end up together because of timing. The woman decides to settle down and whoever she happens to be with at the time ends up with her.

The girl in the pussyhat was sneaking looks at me. Maybe she was wondering why I wasn’t hitting on her. Some beautiful girls are like that. They mean it when they complain about men constantly hitting on them, but when it doesn’t happen, it’s weird for them.

She picked up her bag and scooted over so she was sitting next to me. She pointed at her hat, then took it off and stuffed it in her bag.

She sighed and looked down at her lap for a moment and squeezed one hand with the other.

“I’m not one of those social justice type people. I mean I’m against racism and Trump and men being assholes and everything, but I’m not all like Down with the Patriarchy!”

She’d put her hands up in double signs of the horns as she’d said Patriarchy.

“Those people are crazy.” She blinked and shook her head. “I’m sorry. I’m Michelle.”

She held out her hand and I shook it and told her my name. She repeated it back to herself and looked down at my feet.

I’m not a conspiracy theorist, but I have a conspiracy theory that everyone is on drugs. The people who think that they aren’t are actually using so much they don’t even remember taking them. These are the kinds of people who find half smoked joints and blame their children.

“This company. You know the little boutique down on Lafayette, the place kind of next to the big camping place?”

“I love that place! They have these titanium mess kits from Japan. I don’t even go camping, but that stuff is so awesome. Have you seen the inflatable solar lamp?”

“I actually have one of them. You can charge your phone with it.”

“That’s totally my excuse for buying one. I’m saving the environment.”

“See how funny I am?” She tapped her chin with a finger. “What was I talking about?”

She shook her head some more.

“The little boutique on Lafayette?”

“Yes yes yes. They pay me to wear this crap.”

She pulled at her t-shirt.

“And go to protests?”

She rolled her eyes.

She sighed and sank in her seat.

“It was only a matter of time.”

“Only a matter of time.”

“There was nothing you could have done.”

“Nothing I could have done.”

She shrugged her shoulders.

“MMMM. I have to have one. To save the environment.”

She had a high, almost squeaky voice and crisp intonation. Like she’d had a speech impediment as a child that had polished everything else with its correction. At this point, I was 100% in love with her. It doesn’t take much. Not for any of us. But for the other ones, the loved ones, it’s different. She was charming and beautiful to everyone and I was just another one of the charmed.

A door opened next to the receptionist’s desk and a smiling nurse with a clipboard stepped halfway out.

She collected her bag.

“Nice chatting with you.”

She turned and started to walk away and I felt my insides shrinking. It was all in my head, and it was disappearing.

She stopped and turned around.

“You wait for me and I’ll wait for you?”

I gulped and blinked my eyes. She had to have noticed.

“If I’m not here when you get out I’m either still with the doctor or outside smoking.”

She took the pussyhat out of her bag and tossed it to me, then waved goodbye and turned to follow the nurse.