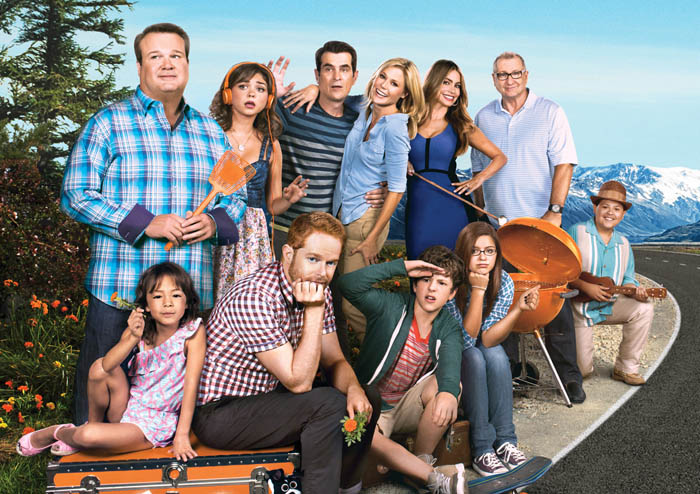 At first glance, Modern Family appears to be progressive despite its standard archetypes. We have the goofy dad, the two hot moms, a hot 18-year-old girl pretending to be 14, and two guys living together.

Gloria Delgado (the feisty latina hot mom) is played by Sofia Vergara, age 45. Her husband is played by Ed O’Neil, age 72, most famous for his role as Al Bundy on Married… with Children. This time around, he plays the exact same character, except old and rich. It’s like Al Bundy won the lottery, dumped Peg, and married a trophy wife.

The other hot mom is also a housewife, and so is one of the gays.

Take an episode of Leave it to Beaver, replace Mrs. Cleaver with a latina, a robot, and a gay, add a dash of cleavage and throw in a few cultural references, and there you have it.

Like a drunk with a shotgun, ABC/Disney takes aim at as many different demographics as possible. You like cantankerous old men? You’ll love Al Bundy. You like big-assed Colombian women? We have one of those, too. If icy white ladies are more your thing, we’ve got you covered. And if you want something not quite legal, you’ll love her daughters (and in real life, they’re legal, so no guilt). Or if you’re into dudes making out with dudes, we’ve got something for you, too.

You’ll be so distracted by the progressive PC characters, you won’t notice it’s just three crappy sitcoms crammed into one.