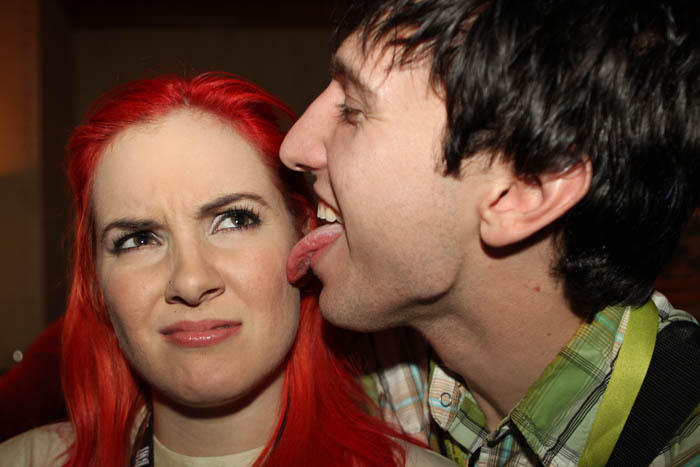 I’m not above a pity fuck. If anything, I’m below it. I’ve lied about my mom dying, my dog dying, my cat dying, me dying. I’ve lied about everything. I will literally say anything to get laid. And I’ll actually do some horrible things, too.

The way it is, women want it just as bad. We all want it. But most people are unevolved. They need a plausible excuse to put out. Love, a dead cat, a dead dog, whatever.

So your job, as a person who wants to get laid, is to expedite it.

The most important thing is to never give up. Keep talking. You’ll be amazed at the bullshit that comes out of your mouth. For me, whenever I have a crisis of creativity, I think of the girl in her panties. I imagine her taking off her panties, her upper inner thighs, her bush, and I keep talking. The bullshit just flows out of me. Yes, I am rich and I have a great job. I’m actually the boss of my job. The big boss. And I am wonderful, the best! Lots of people want to fuck me, I swear to god, but I love you, baby. You’re the only one for me. The second I saw you I felt it. I knew it.

Fake deaths, pity fucks, are probably the best bet. I want to cry anyway, so it’s kind of honest. I just cry. I try not to. I pretend I’m trying not to. 90% of the time, it won’t work. None of this will work. But you can’t let that stop you. The 10% of the time it does work, it’s worth the degradation. If you get off on being degraded, you’re halfway home.

When a girl finally feels sorry enough for me to ask me what’s wrong, I hug her immediately and bury my head in her shoulder and cry. And maybe grab her ass by “accident.” To let her know what’s up. After that, I read the situation. If she looks like a dog person, my dog died. If there’s dog fur on her, it’s definitely my dog that’s dead. I was with that dog forever. He was my last link to my childhood. And now the poor bastard is dead and I just can’t take it. I can’t be alone tonight. I just can’t.

This may sound counterintuitive, but if you’ve gotten this far, the next thing you do is ask her to buy you a drink. I’m just so distraught. Too distraught to even think about money or earthly things (except for fucking). Women, once they’ve decided to fuck you, are an easy touch the first time. They want to like you, they want to be generous, they just don’t usually have the opportunity. And if you owe them money, it improves your chances of seeing them again. Of them wanting to see you again.

By this point, you can literally say anything. You can even admit you’ve been lying your ass off. Most women are flattered. You’re friends now, so they let bygones be bygones. Women are practical about this. They want you to earn it, but they don’t really care how. And for most people, or at least me, lying works a helluva lot better than the truth.

One thing that works almost 100% of the time – if you’re really desperate, pretend to be blind. Being “blind” makes you “deep.” Every dumb thing you say is suddenly meaningful. “Does grass look the way it smells? It smells so beautiful.” And off come the panties. And the other advantage of pretending to be blind, just about every normal, regular thing you do is impressive. Turning door knobs, making a cup of coffee, walking. They’re so impressed by how independent you are. That you can live without a dog or a cane. And it’s a built in excuse if you have trouble finding their clitoris. You should actually pretend to have trouble finding it. They’ll make a joke about braille and feel guilty, then put out even harder.

The most important thing, if you ever want to see her again, is to remember your lies. Even if you’ve already admitted you’re full of shit, they expect you to remember the lies. Once the sex is over with, it’s back to pretend land. So remember your dog is dead and you’re blind. Or suddenly be blind and have a dead dog again. Women really aren’t that different from men. Anything but reality, anything but the truth, they can deal with. And they know you’re lying. They aren’t idiots. But they appreciate it. So in a way, you’re telling the truth. Being a lying sack of shit is the same as telling truth, basically.

When it inevitably goes bad (and believe me, it will), tell her you have AIDS. That that’s the reason you’ve been so distant and weird about everything. Because you care about her. Because you don’t want to give her AIDS. If she still wants to fuck you after that, don’t do it. Do not do it. If she’ll fuck a guy with AIDS, she’s obviously nuts and probably diseased. Go to a clinic and get checked out. Women are really evil about lying about being not diseased or infested with crabs or what have you. Their excuse is that it’s embarrassing, and they think that’s a good enough excuse. For this reason alone, you have every right to lie your fucking ass off and never feel guilty about it. And again, they expect it. They practically demand it.

Maybe someday you’ll find your “soulmate.” Your little sweetie pie. But until then (so basically forever), lie your ass off.