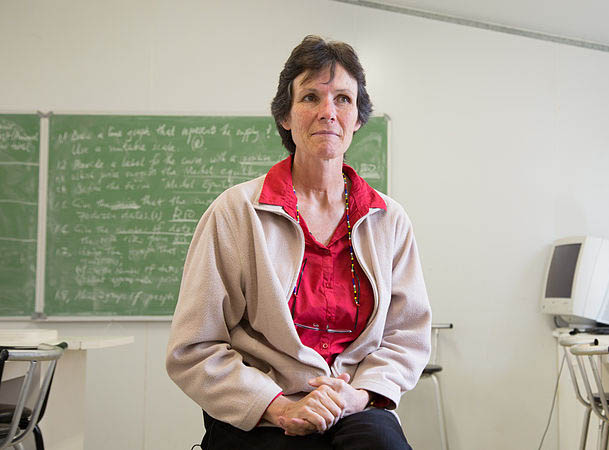 Mrs. Tabatsky was an elementary school substitute teacher. The first time I had her was in 2nd grade. She always talked about herself in the third person and had a nasally, monotone voice.

Maybe she did this to emphasize the “Mrs.”, that yes, indeed, she was married. She was a short, fat, pear shaped woman with a doughy face and thick glasses. I didn’t even like girls yet, but I couldn’t imagine anyone living with her. So this is what adults do. They pair up. Even with people like Mrs. Tabatsky. I wondered what her husband was like. I felt sorry for him, but he was probably awful, too.

Mrs. Tabatsky might have been tolerable if she wasn’t so whiny. She was whining all the time. Nitpicking. Any time she could criticize anyone for anything, she had to do it. It was impossible to read or color with her wandering up and down between the desks spouting off nonsense every 30 seconds.

She stopped beside Missy’s desk, which was right next to mine. Her enormous ass was jammed right in my face.

Missy was always a bit slow.

I couldn’t see her from my angle, all I could see was that fat, lumpy ass straining against tan polyester. But I could imagine Missy’s confused expression and sensed she was looking around for help. All of the other kids ignored her. Helping would only make it worse.

“Your shoes, Missy. Look at your shoes.”

Mrs. Tabatsky straightened up for a second and her ass moved an inch away from me. Then she relaxed and slumped and it was right back in my face.

And she was back to her wandering.

I wondered what kind of person could live with her.

That spring, I got a job as a paperboy. This was in the early 80s, before paperboys were disenfranchised by papermen with vans. Everyday at around 4:00 a.m., seven or eight bundles of newspapers were dropped off in front of my house. Each bundle was a section of the newspaper. Section A, B, C, etc. I’d take the bundles into my house, clip their straps and unfold the sections, and build each newspaper. There were about 40 people on my route. I usually got a few extra sections, so in addition to my $8.00 a week, my family usually got a couple free newspapers.

My dad was always awake when the bundles arrived. He didn’t have a job. I couldn’t understand why he woke up so early. I hated waking up that early. It annoyed me that he was around. He was always around. Other people were always around. I’d give the first completed paper to him so we wouldn’t have to talk to each other, but he’d complain out loud about whatever was in the paper.

Then he’d look at me.

“These people are idiots! All of them! Idiots!”

I guess he thought he wasn’t an idiot.

Once the papers were built, I’d load them into my bag and hop on my bicycle. Most of the subscribers, I had to stop and put the paper into their mailboxes. Some of them preferred their paper on the porch. Like paperboys everywhere, I threw the papers as I rode the bike. It was the one fun part of the job.

When there was rain, the bundles came wrapped in plastic and I got little plastic baggies for the papers. Collecting the subscription fees once a week was a pain in the ass, but I got used to it. Out of my 40 or so customers, it was always the same two or three who tried to stiff me. A seven year old kid, and they tried to rip me off. I had a little pad with all of their names to keep track of their payments. It was basic arithmetic, but they were willing to argue.

One lady, her house always smelled of cigarettes. Even 20 feet from her door, you could smell the cigarettes. She must have been smoking constantly. She looked like death and it sounded like it was murder for her to get to her door, but she always paid.

Everything went relatively smoothly until one collection day that August. Mrs. Tabatsky was an asshole, but she always paid. I had figured her as the type to try to rip off children, and it turned out I was right.

I rang her doorbell and waited. Any job that requires you to regularly ring doorbells is a bad job. She opened the door and folded her arms.

“Mrs. Tabatsky wants to know what you want.”

I opened the pad and pointed at her line.

Papers were a quarter a day and 50 cents on Sundays.

“Mrs. Tabatsky thinks that it’s rude to just tell someone that they owe you money like that.”

Wasn’t it even ruder to make the person you owe dance for it?

She adjusted herself to put her weight on her other leg. At least she wasn’t wearing a nightgown. She looked the same as always, polyester pants and a shirt with ruffles.

“Mrs. Tabatsky thinks you have something you want to tell her.”

She rolled her eyes and pointed. Her door frame was lined by windows, and the bottom window on the right side was broken.

“Do you have something you want to tell Mrs. Tabatsky?”

I looked up at her, then down at the broken window, then back up at her.

She closed her eyes and shook her head in frustration.

“So what do you have to say to Mrs. Tabatsky?”

I exhaled. I still had a dozen or so houses to go and I was missing my cartoons.

I hadn’t broken her window, or at least I was pretty sure I hadn’t, and if you spent $700.00 for windows from France that could be broken by a newspaper, you were an idiot.

“In all her years, Mrs. Tabatsky has never encountered such a rude little boy. I’m calling your parents, the newspaper, and the principal.”

The principal? During summer vacation?

If she thought she could get $700.00 out of me or my family, she was crazy. But she did manage to get me fired.

So this is what life is going to be like. Every adult I knew, except for my dad, worked, and they all hated it. Some of them were better at pretending that they didn’t, but they did. But you needed to work if you wanted soda and bubblegum, and at any second, you could lose it all.

For the first time I felt despair. What was Mrs. Tabatsky like when she was a kid? Did she dream of one day ruining a seven year old? She couldn’t have. But that’s what it had come down to. That’s where her life had led. She hadn’t planned it or expected it. She had probably done a lot to try to avoid it. But here we were.

And I never got to see her husband.