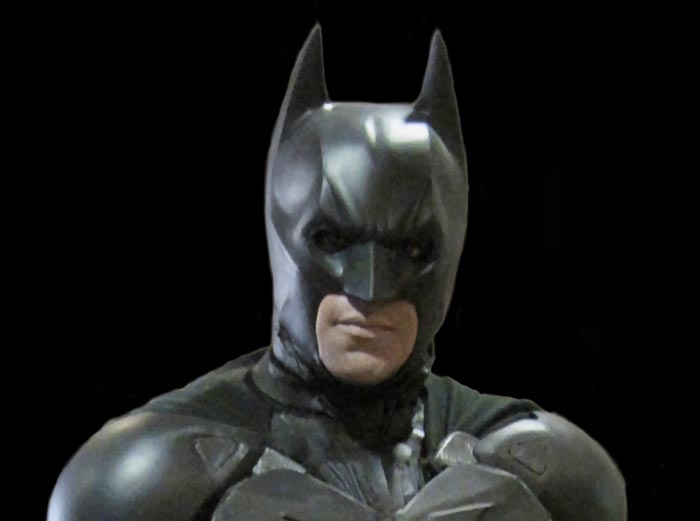 I don’t know how to say this so I’m just going to come right out and say it. For most of my adult life, I’ve been dressing up as a giant bat at night to go out and fight with clowns. I say clowns plural because, well, clowns are kind of hard to tell apart. This was the whole reason for my no killing rule. The first time I went out, I basically murdered an innocent clown. I’m also color blind, so that doesn’t help at all.

Clowns are a lot tougher than they look. A lot tougher. The Joker, the main clown I fight with, started out as a circus clown. I know he has a lot of other origin stories, but trust me, I know. He was just a regular circus clown, and I guess being a circus clown is a pretty lousy job. In addition to being a clown, he also had to clean up after the animals and cook dinner twice a week. He got attacked by one of the goats, which is how he got the scars on his face, and I guess that pushed him over the edge. Now he’s just crazy. And he’s making me crazy. I was fighting him last night for what must have been at least the 100th time. We talked about this and he told me that he wasn’t really the problem. That if I took a long, honest look at myself, I’d see exactly who the problem was, and he’s right. He’s absolutely right.

I’m well over 40 years old, and this craziness has cost me my relationship with my favorite butler. And I’ve been doing this for so long, I’ve gotten sloppy. I drove halfway to Wayne Enterprises yesterday before I realized I was still in costume. I’ve also started to gain weight, and maybe even worse, I’ve started to murder clowns again. The thought of having to fight them over and over and over again wears me out, so now I just kill them. Except for the Joker. I thought about this, and I think I keep him alive because I have low self esteem. If I killed him, Gotham wouldn’t need me. No one would need me. I’d just be a crazy old man dressed up as a bat.

So for my sake, the city’s sake, and everybody else’s sake, except for maybe the Joker’s, should I just kill the Joker and end this nightmare? I’m hesitant to do it, because what if killing him isn’t enough? I’m afraid I’ll kill him and nothing will change. At this point, I’m so set in my ways, I wouldn’t know what else to do with myself. Drugs, booze, gambling, butlers. Once you’ve broken a clown’s neck with your bare hands, nothing else comes close.

PS: Any weight loss tips would be appreciated.

I’m not going to sugarcoat it, you’re really on a bad path. It seems like every day you get broodier, grumpier and more willing to commit murder. I mean, when’s the last time you laughed? Considering all the time you spend with clowns, you’d think you’d at least chuckle once in a while. That Jokester, or whatever his name is, really lets you have it with some funny zingers during your fights. They certainly make me laugh when I’m watching. In fact, that’s reason enough right there not to murder him. Remember that time he hit you in the face with that exploding pie? Or the time he punched you in the balls with that cement boxing glove on a spring? Those were classic moments. I don’t condone murder, but if one of you is going to be killed, I’m actually rooting for it to be you. I mean, sure, you’ve been somewhat generous with the philanthropy, but it’s all been pretty superficial. When’s the last time you volunteered at a soup kitchen? Meanwhile, your sworn enemy is out there helping homeless people off the streets by giving them jobs. You know those 12 clown henchmen you threw off the Gotham Bridge last night? They were Purple Heart vets who lost their teaching jobs due to crippling bouts of PTSD. I hope you’re proud of yourself. Anyway, my point is, you can’t keep this up forever. I say just let the clown win next time. Maybe he’ll surprise you and show you the same mercy you’ve always shown him. On the other hand, maybe he’ll finish you off. Either way, I think you’ll be happy with the results.

Jennifer Garner says you didn’t fuck the nanny until after the two of you were already separated, but we both know that’s bullshit.

Wait—this is the real Batman? Sorry. All those actors who have played you over the years are always writing in, too. Strangely enough, most of them have the exact same clown-murdering problems you have, so it’s hard to keep you all straight. Just last week, Val Kilmer went crazy at a fair in Northern California and impaled seven clowns with corn dog sticks in the throat. It would have been big news, but then that Al Franken boob-touching photo was released and suddenly nobody cared about the California clowns. Anyway, it’s strange that Jesus didn’t mention it, but you’ve already killed enough clowns to warrant eternal damnation in Hell. When you finally die (you say you’re in your 40’s, but you were already in your early 30’s back in 1939, so you’re not fooling anyone) you’ll be treated to endless amounts of exploding pies in the face and cement boxing gloves to the nads, as well as the house special clown sodomy and much, much more. It sounds bad, but look at the bright side. Seeing as how your fate is already sealed, what you decide to do with the Joker is pretty inconsequential. Go ahead and kill him if you want. That’s not what I would do, but then again, I love clowns more than most people. If you do decide to kill him, though, I suggest you consider sodomizing his corpse afterwards. You may as well experience being on the giving end of that while you’re still on earth, because once you’re down here, it will be your ass taking the pounding.

As for weight-loss tips, I suggest giving up beer. Vodka has a much more favorable Calorie from Alcohol ratio. Also, just stop eating altogether. You’ll lose muscle mass, but it hardly matters since your costume is molded to look muscular anyway.