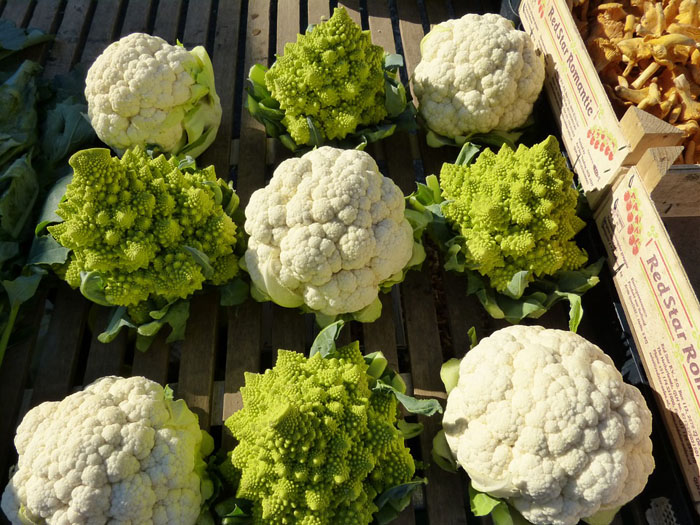 It seems like I have too much food, but never enough. Enough to worry about it rotting, but not enough so I’m not daily going back to a grocery store or deli. I need small amounts of a lot of things, but it’s impossible to get them in small enough amounts. So I have all this food, but it’s always the same food. I try to deviate from the cauliflower, cabbage, and chorizo, I go to the supermarket intending to, but I don’t have enough experience with other food. I wouldn’t know how to deal with it at all.

I don’t know enough recipes either, and I have trouble improvising. To make what I usually eat, I need cauliflower, cabbage, and two links of chorizo. And also chicken stock, which I’m always forgetting about, and onions and garlic, which I always seem to have and never worry about, maybe because they never seem to go bad. If I get hungry and I’m lazy, I’m sometimes tempted to make a sandwich with one link of chorizo, but that would throw everything off. I’d be left with an odd number of chorizo, so eventually I’d be left with cabbage, cauliflower, and only one chorizo, which would mean I’d have to buy more chorizo, preferably an odd number of links, but still, I’d be roped into at least one more cycle of chorizo, cauliflower, and cabbage, and if I ran out of cabbage or cauliflower during that cycle, I’d have to buy another and be roped into yet another cycle. I don’t like being roped in to these cycles. I can’t break them anyway, but I don’t like feeling like I don’t have a choice, even though it doesn’t ever really feel like I have a choice anyway, even when I keep the number of chorizo links even. There are rare times when I finish the cabbage, cauliflower, and chorizo at the same time. The cycle is over. But now I have to think of other foods to buy and eat, I have to plan for a different kind of cycle, and I can’t do it. I go to the supermarket intending to do it, I put steak into my bag, and then potatoes, because if you get steak, it seems like you need to have potatoes, too. But how will I cook the potatoes? I could make mashed potatoes with butter and salt, which I also always have and never worry about, but making mashed potatoes is difficult. It seems like a lot of effort to make mashed potatoes for just one person, me, and I’m not even sure if I like mashed potatoes. So I put the steak and potatoes back and buy more chorizo, cauliflower, and cabbage.

I have the same problems with laundry. I wear undershirts and underwear for as many days in a row as possible, for as long as they aren’t obviously stained and don’t smell too badly. But I know I’m just delaying the inevitable. Socks and underwear determine the laundry cycle. I can’t wear socks more than one day in a row because my feet sweat too much, so eventually, when I run out of socks, I’ll have to do the laundry anyway. So I change my approach as I run out of socks and start wearing new undershirts and underwear every day, assuming I haven’t run out of underwear yet. Usually, the underwear is the first thing to go. When that happens, there’s never enough laundry yet to justify doing a load, so I’ll add my sheets (which I never think or worry about cleaning), shirts, and dirty towels (which I also never think about cleaning). After this, I usually have too much laundry. I’ll have to use a bigger washing machine that I shouldn’t need to, and now I have no choice, because it’s impossible to live without towels, and somehow towels are the most easily tainted by being in a laundry bag. Underwear can sometimes be retrieved and reused, but towels can not.

The washing machine takes 24 minutes and the dryer 30 to 48, depending on towels and socks. I almost never clean my pants. It seems like I can rotate them forever. Like coffee, onions, and garlic, I hardly ever think or worry about them. What I do worry about is how to spend those 24 minutes, and then the 30 to 48 that follow. It seems like I should be using that time to do other chores, like buy groceries, but is it possible? If I need perishable items like milk or cauliflower, and I always seem to, it’s difficult to time it correctly. If the supermarket is busy, I won’t be able to make it there and back before the washing machine is done, and someone might dump my wet laundry on the floor. This has never happened to me, but I’ve heard about it happening and I’ve done it to other people, so I know that it can happen. And even if it does all work out, what do I do about the other 30 to 48 minutes while the clothes are drying? I could read, but I can’t. There are loud televisions at the laundromat, a couple speaking English and a couple more speaking Spanish. I can’t concentrate enough to read. And it’s usually either too hot or too cold inside, and there’s no place nearby where I can sit outside. I could try to find another laundromat, I see other, more welcoming laundromats, but my laundromat, the nearest one to my apartment and the first one I went to, before I knew better, doesn’t take quarters. You have to buy a card and put credit on it, and no matter what I do, there are always 12 or 39 cents left on the card, so I can’t abandon the laundromat. I can’t abandon those 12 or 39 cents, even though it might be cheaper at another laundromat even after the loss of 12 or 39 cents.

It keeps me up at night sometimes, not only the worrying about laundry and cauliflower, but the worrying about the worrying. So what if a head of cauliflower goes bad? They only cost about $2 each, and it won’t be around for long no matter what happens, whether I eat it or it goes bad. So what am I doing, calculating cauliflower to chorizo to cabbage, or worrying about how much is left on my laundry card? I want to empty the laundry card, but I’m always worried that there won’t be enough left on it the next time I have to do laundry, and maybe I won’t have the right money to reload it. I only like to reload it $5 or $6 at a time, but sometimes I have to use a $20. If that happens, I worry about losing the card.

Sometimes it seems like I’m not meant to be alive. Even when things are going smoothly and I have plenty of underwear and I’m sure I’ll finish the cauliflower before it goes bad, I can’t be happy. Because tomorrow, I won’t have enough underwear, or I’ll have to buy yet another head of cauliflower, and there are all these other things to keep track of like toilet paper, soap, and sugar. I never worry about sugar, and I should. I always run out. It never seems like I will, but eventually, I always do. I put it in an old glass jar, I can see it go down each day, every time I make coffee, and I ignore it, or I tell myself that there’s still plenty left. For some reason I’m in denial about the sugar. Maybe it would be too much to cope with, to have to worry about the sugar, too.

A solution for the toilet paper and sugar, and maybe even the underwear, would be to stock up on it, but this worries me too because what if I have to move? Do I bring the toilet paper and sugar with me? Do I bring half-used bottles of olive oil, cans of tuna fish, bread? Am I supposed to? It’s difficult to bring those things when you have to move, you have all the pressure of moving and some of the pressure of grocery shopping. (I don’t bring the milk when I move, what if it opened and got all over my clothes?). And you have to bring the dirty laundry, which has always bothered me. Ideally, I’d move at the start of a laundry cycle and the end of a food cycle, but this never happens. It’s bad enough to move and have to bring dirty laundry and half-eaten heads of cauliflower, so I wouldn’t be able to handle having to move lots of sugar and toilet paper, too.