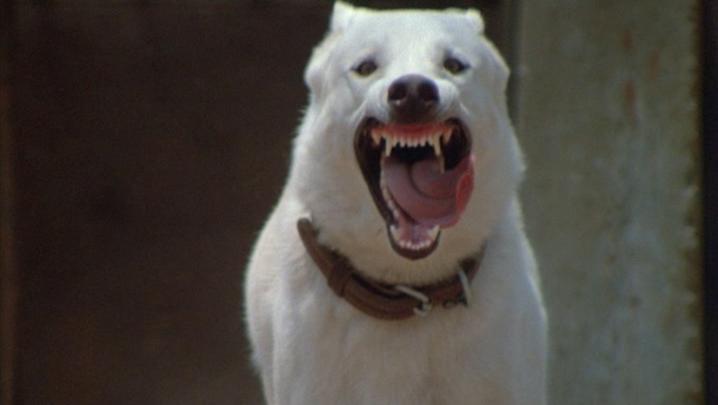 Originally released in 1982 but suppressed in America over concerns it was racist, White Dog, like Gone Girl, is basically a Lifetime movie come to the big screen. It started to gain a cult following in the early 2000s after insomniacs who saw it on TV at 3:00 a.m. just had to tell their friends about it. Most of them swore they’d seen it on Lifetime, some even thought it was a Lifetime movie. Eventually, White Dog was reinterpreted as “misunderstood,” rather than “campy” or “insane,” and released as a Criterion Collection DVD in 2008.

White Dog is about a racist white German shepherd who attacks black people. These attacks are as brutal as they are hilarious, and they are brutally hilarious. Laughing will make you feel like a racist, but you won’t be able to help laughing.

Kristy McNichol (Empty Nest) plays an actress who rescues the titular dog after hitting him with her car. Shortly afterwards, the dog saves her from a white rapist by attacking him. The attack is vicious, but it’s nothing compared to what this dog does to black people.

The dog sneaks out (he always seems to be getting loose and sneaking out) and stalks a black truck driver, then leaps in through the passenger side window and mauls him so badly he crashes into a storefront. This is probably the most expensive scene in the movie, and they milk it for all its worth. Shattering glass and splintering furniture is shown from various angles interspersed with closeups of teeth gnashing and growling as white fur is juxtaposed against black skin.

The dog comes home covered in blood and Kristy McNichol barely notices. She’s actually relieved that the scratching at her door was just a blood-drenched dog and not another rapist.

She takes the dog with her to an acting gig and he attacks her black coworker. Whoever stage-managed the dogs (five different dogs played the White Dog) coaxed unearthly expressions of rage out of them. Whatever they did to get the dogs that angry probably isn’t legal anymore. I felt particularly guilty laughing at this attack, but I forgave myself immediately. At first the dog is fine, then he sees a black person. Suddenly he’s snarling and furious and soaring through the air at her. Aren’t dogs colorblind? How does this dog even know who’s black? (This actually gets explained–poorly–later.)

Kristy McNichol takes the dog to animal trainers for “reverse-training,” and this is where we discover that he isn’t just an attack dog, but a “white dog”–a dog trained by racists to hate black skin. How do the racists do this? According to the animal trainer (Paul Winfield), they pay homeless black junkies or winos to beat the dog when it’s a puppy. After awhile, the dog equates black skin with fear, and then fear becomes hatred (The Phantom Menace ripped off White Dog).

The “reverse training” is going horribly, so the dog gets loose (in spectacular fashion) and sneaks away. This time, he murders a black man in a church. Amidst the mauling and snarling, the camera pans away and zooms in on a stained glass portrait of Jesus, a white dog at his side.

But as this film has shown us, and Paul Winfield explicitly tells us, racism is a disease. And you can’t cure a disease by killing the host. It isn’t the dog’s fault he’s like this. It’s the “two-legged racist” that trained him.

White Dog is a wild ride that’s well worth the price of admission, especially if you can borrow it for free from your local library like I did. Strange actors from the 80s you’ll vaguely recognize are in it, Kristy McNichol never looked better, and the ending is appropriately cynical and hilarious.