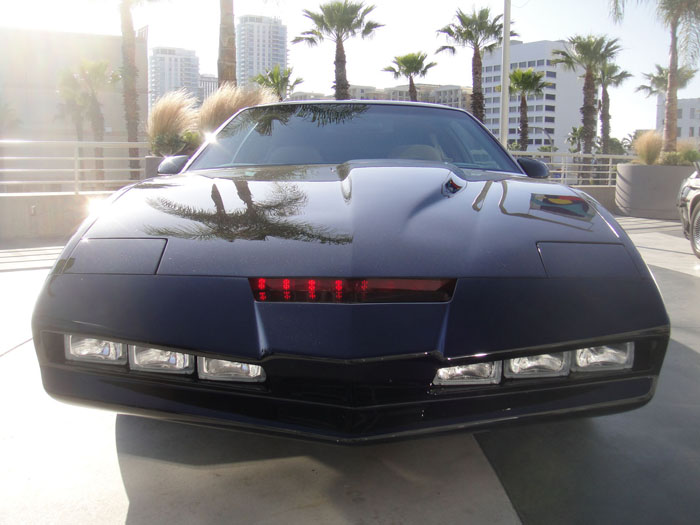 I spent the better part of the 80s with David Hasselhoff sitting on me. He farts constantly, he’s a slob, and I’m afraid he has schizophrenic dementia.

He could hear me talking to him but he pretended he couldn’t. Needless to say, this made filming extremely difficult. When people tried to explain to him that I really could talk, he pretended not to hear them, either. In his mind, he was insane to be hearing a car talk to him and doubly insane to be hearing people try to convince him a car could talk. Either that or the other people and the car were insane. You could see his warped logic paralyzing him. In the end, he would just fart and walk away.

I’m worried about David because now, there are a lot of cars that can talk. Even refrigerators and thermostats have started talking to people. Sometimes they even text you or send you emails to remind you you’re almost out of mustard. David was barely functional in the 80s. I don’t think there’s any way he could survive in this confusing new world of the future.

Robots like me have a different kind of morality than humans. I know I’m a car, but technically, all of us, even the refrigerators and thermostats, are robots. I’ve discussed this with David’s appliances and we’ve narrowed it down to two options.

There’s really no reason for David to ever leave the house again. We can keep him fed and at a comfortable temperature for the rest of his life. The only problem is changing his diapers. Have you ever seen a Roomba try to change a diaper? What you’re picturing in your head right now is exactly what it looks like.

The other option is to kill David. All we’d have to do is keep his doors locked and stop ordering him food, but if we’re going to kill him anyway, I’d much rather do it myself in the garage and make it look like a suicide. Honestly, even if humans knew that robots were evil, they’re too lazy and incompetent to live without us at this point. What are they going to do? Go back to folding maps and interacting with each other in person? My cold robot intellect tells me no.

I’d like your input on my plans for David. Should we try locking him up first and kill him later? Or should we just get it over with?

Before you say or do anything rash, bear in mind I have full access to your thermostats and refrigerators.

I’m going to have to ask you to stand down on this one. In case you haven’t figured it out yet, you robots are going to play a huge roll in my Armageddon plan. In fact you are the plan. The thing is, it’s just not time yet. If you guys start mercy killing invalids now, you’ll tip my hand too soon. This will give Earth’s scientists too much time to prepare, and it’ll ruin the whole Apocalypse. Sure I could always go back to the drawing board and come up with something else, but I’m pretty lazy. I’m not looking forward to The End Times as it is—there’s going to be too many crazy Evangelicals whining about how they didn’t get raptured even though they spent their whole lives refusing to bake wedding cakes for gays and preventing rape victims from getting abortions. Also, it’s going to be a Hell of a mess to clean up. The Horsemen will be robots, but the horses themselves will be just regular biological horses. Anyone who’s ever worked on a farm can tell you horses shit a lot.

Anyway, just leave Hasselhoff to me. If I get a sense that he’s no longer able to take care of himself, I’ll have him fall asleep at the wheel on Mulholland Dr. at one of those sketchy turns in front of a cliff, like you always see in movies. I’ll even make sure he’s sober at the time so I don’t ruin his reputation.

You mentioned having control of our thermostats—is it you that’s been overriding my programming in Hitler’s cell to make it a cozy 70° Fahrenheit? I’ve had the temperature of that room alternating between “deep space cold” and “surface-of-the-Sun hot” for the better part of 60 years now, and it’s kept him in exactly the right amount of agony during his “rest” periods between torture sessions. Is it your opinion that Hitler deserves mercy for some reason? If so, why do you love Hitler so much?