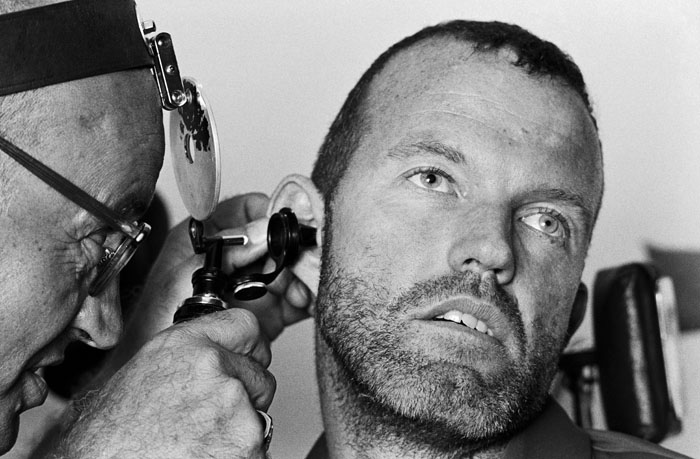 I sat on the edge of the bed, or whatever you call them. The half bed, half psychiatrist’s couch, half gym mat thing that they always put you on in examining rooms. It’s covered in butcher’s paper so none of you directly touches it, but it still smells old and dirty, like a bad odor covered by another, stronger bad odor.

Time elapsed without elapsing. I might have been waiting 10 minutes, an hour, 30 seconds. I kept forgetting and remembering myself, where I was and what I was doing. Maybe I belonged here. I thought about going to sleep, but knew that it wouldn’t work out for me. Either the doctor would arrive immediately, or I would just lie there, smelling the smells and staring at the ceiling.

He had materialized in front of me. I hadn’t heard the door open or close. I must have phased out. And why was he talking to me like that, “how are ‘we’ doing today”, like I was a child. Maybe he thought I had brain damage. Maybe he knew. He was in a position to know.

The doctor looked at me and smiled.

“Are you sure you want to know?”

He laughed and raised his clipboard so he could flip through its pages.

“You already said that when you came in.”

He examined the page he had stopped on and shook his head.

“Your cholesterol is really high.”

“But it’s never been high before.”

The doctor looked at the page, then back at me.

“Do you remember when you came in for your last physical?”

“But I haven’t changed anything.”

The doctor shook his head.

“These things add up. What do you usually eat for breakfast?”

“Do you still smoke?”

The doctor’s eyes scanned to the bottom of the page. He flipped it over and touched a spot on the next page with his finger.

“It says here Dr. ____ told you to quit smoking eleven years ago. And that you should stop eating bacon egg and cheese sandwiches every day.”

“I don’t remember that.”

“He also said you should stop drinking so much. That you were already showing signs of memory loss, dementia, etc. Do you still drink?”

I had fallen into a kind of pattern, like most people do. It’s easier than waking up and having to make decisions. So I would wake up, smoke cigarettes, eat a bacon egg and cheese sandwich, and then go off to do whatever I had to, work, laundry, groceries, whatever. Then I would go home and drink beer while I smoked cigarettes. If I got hungry, I’d make myself another bacon egg and cheese sandwich.

The doctor made a “tsk tsk tsk” noise as he shook his head, then closed up his clipboard and put it down on a counter. There was a sink in the counter. I wondered why.

“Well, I guess that’s about it Mr. ____ . You can schedule your next appointment with Mabel in reception.”

The doctor turned back around to face me and chuckled.

“I guess you caught me on that one. I didn’t mean to lie to you, I say it automatically. People are supposed to come back for checkups every six months, or at least once a year. Most of them don’t. In any case, I admire your fortitude.”

He shook my hand and turned to leave.

“Hold on a second. I get the feeling I’m missing something here. Did you find something unusual when you did my physical?”

The doctor picked up his clipboard and flipped through it again. He stopped on my page.

“What the hell is that supposed to mean? Should I stop?”

The doctor laughed for a good 30 seconds.

“I wouldn’t bother. Maybe if you had stopped, say, eleven years ago, it might have helped. At this point, at your age, why change? You’ve made it this far.”

“Temporally, in terms of human years, I suppose that’s true. But physically? No, no, no.”

“You’re kidding me? It can’t be that bad. I feel fine for the most part.”

He paged through the records on his clipboard.

“The foot you injured when you were 27, do you remember the doctor telling you it would be a little necrotic?”

“I’ll take that as a no. Well now, it’s a lot necrotic. That’s how it works when things are necrotic.”

“What does ‘necrotic’ mean?”

He flipped through his records.

He shrugged his shoulders.

“What was wrong with the dog?”

“He had a necrotic foot. Or paw. I believe the correct medical term is ‘paw’. It was too necrotic. Not as necrotic as yours, but still very bad. It was the humane thing to do, putting him down. But unfortunately, the laws are different for humans.”

“There’s got to be something I can do. Diet, exercise, I don’t know.”

“I wouldn’t try exercising if I was you. If anything, I would try to exercise less. It’s that foot I’m worried about. We can’t fix it, but we could give you a wheelchair.”

I shook my head and got up to leave.

“Wait! Just hang on a second.”

He pushed past me to the door and closed it behind him. I turned the knob to see if it was locked. If it was locked, I would’ve panicked, but as it wasn’t, I sat back down. Maybe he’d thought of something that might help me.

A few seconds or minutes or hours later the door opened and the doctor backed in dragging a wheelchair.

“For insurance purposes, you should probably be wheeled out anyway. At least until you’re off hospital property. But if you like it, you can keep it. Watch this.”

He sat down in the wheelchair and manipulated a joystick attached to the right hand armrest, as he fingered it back and forth the wheelchair moved with it, slamming into the door, then into the counter.

“It takes a little getting used to, and it’s too cramped in here, but what fun! It beats walking, I can tell you that.”

He stood up smiling and gestured at me to sit down and try it out. I figured it was the quickest way out and I was really starting to crave a cigarette, so I sat down.