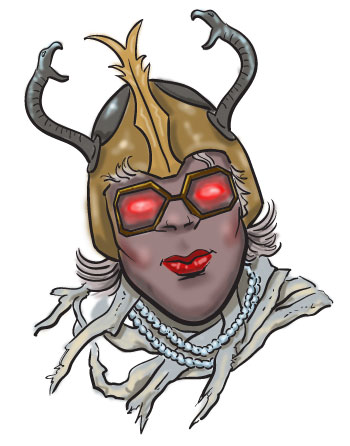 We knew there would be a live-action ThunderCats movie eventually. How could there not be? What surprised everyone, however, was just how badly Tyler Perry wanted to make this. Even more surprising is that the only part NOT given to an African-American actor was the part of Panthro, portrayed in the film by Neil Patrick Harris. Perry was not prepared for Harris to steal the show once again as he did in Undercover Brother, but that’s what makes the film so fresh and hip. Casting himself in his Medea persona as Mumm-Ra was a stroke of genius, and no less brilliant was his casting of Martin Lawrence in his Big Mama make-up as Lion-O. As not to let down his die-hard fans, Perry rounds out the rest of the cast with his go-to actors from his other popular films. Janet Jackson is a stunning vision of Cheetara, Lamman Rucker brings sassy bad-ass to the role of Tygra, and Cedric Yarbrough sprinkles in some foul-mouthed comic relief as the voice of Snarf.

The screenplay, written by Perry and first-time collaborator Luke Wilson, is based on a story drafted by Kevin Smith as a result of a truth-or-dare contest he entered with Ben Affleck. Apparently, Smith had a few too many skeletons in his closet, and thus opted to take Affleck’s dare of writing an entire ThunderCats movie in under an hour. Smith’s treatment did call for a much darker ending in which all the ThunderCats brutally killed Mumm-Ra and then had their way with his corpse. Perry’s and Wilson’s script has a much sweeter, although more homo-erotic ending, which I will not spoil for you in this review. Perry, most notable for his bland 90′s-style sitcom sensibility seemed to be oblivious to the “growing sword” imagery that the ThunderCats is most famous for. This naivety helps the film reach a tongue- in-cheek/anus level of humor that is genuine and not forced. Perry, in fact, was shocked to read viewer’s comments after a test screening and wanted to make very significant edits to his original cut. Fortunately, the studio saw the ironic gold he had created and insisted that Perry not change a single frame. His humiliation is the audience’s gain. I am telling you that, even if you consider yourself a “dog person”, you need to see this film on opening weekend. If you don’t, your life will suffer in quality.