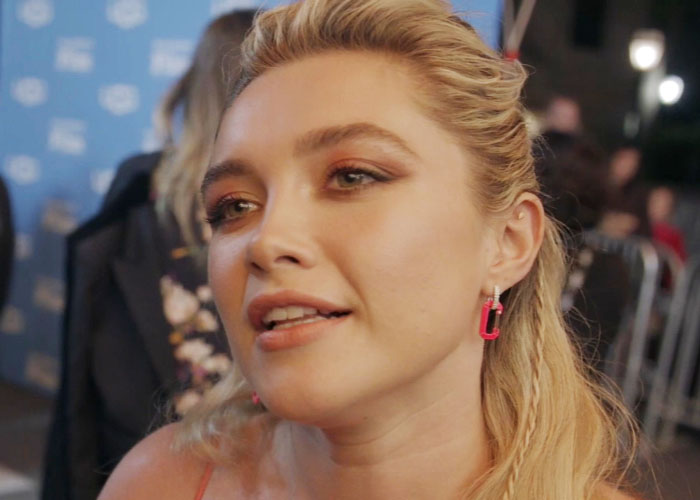 Anyway, my question is what can I do to get the Twitterverse and the media to talk about something else? Like what a fucking badass I am as Black Widow’s kid sister. Or how passable my Russian accent is (compared to David Harbour’s, at least.) I’m a pretty damn good actor, and I’m not bad to look at, so why can’t I get any respect? I’ve already done a classy nude scene in an artsy period film, so what is there left for me to do?

First of all, I know you’re British and everything but nobody under the age of 75 should be named Florence. I mean, that is a grandmother’s name if ever there was one. I think I’ll call you Fiona instead. It’s a much sexier name, and you look way more like a Fiona. You know, I wrestled with the idea of naming everybody before they were born, but in the end, it seemed like too much work. Sometimes I regret that decision, because humans are terrible at name things. I mean, what kind of lazy-ass name for a statue is “The Statue of Liberty?” It’s a little on-the-nose, don’t you think?

To answer your question, there’s really only one way to get the world to take you seriously: kill someone. This might seem like strange advice coming from a compassionate and benevolent deity, but if you look at my track record, it shouldn’t be that surprising. Whoever said violence doesn’t solve anything clearly never read the Bible, which means they’re automatically going to Hell. For a while, violence was my favorite hobby, and I have a feeling it will be again soon. In your case, you have all these assholes on social media attacking your personal choices, I just think the only way to shut them up is to make an example out of one of them. Now, you can kill the person any way you want, but I recommend something dramatic. I was thinking like maybe drugging him, tying him to a chair, and then pouring acid over his head. Or maybe throw him into a pit of alligators. You should be live-streaming it, so think about what will look good on camera. And make sure the audio quality is good. In this day and age, there’s no excuse for an overloaded microphone or distracting background noise. Make sure you’re not anywhere near an airport or train station and that your dog isn’t in the room. Unless the dog is part of the murder. Like if you don’t feed it for a week and slap it around a little and then cover your victim with peanut butter and then let the mutt have at it. That might be even more fun than the alligators. Anyway, be creative. You got this.

I went back to the source material and mined the old comics to bring in a much more complex backstory. The moment I’m most proud of happens after that first sex scene—the one where you fuck each other with the tails of live lobsters. As you’re lying there cuddling on the pier, you start reminiscing about the first time you went fishing with your dad, David Harbor. He taught you a tough-love lesson by throwing you into the ocean with a great white shark and not letting you back onto the boat until you had killed the shark with your bare hands. The touching moment comes when your big sister Black Widow, who had been chained to the deck, breaks free and jumps into the water to help you. It was then that you both first realized you had certain “more-than-sisters” feelings for each other, but you couldn’t act on them—not then. When it flashes forward to the present, you’re both crying, which leads to another round of passionate fucking—this time involving swordfish. I don’t like to brag, but I don’t think there’s ever been a more beautifully written piece of literature in the history of human civilization. If you don’t read it, then you’re a fucking bitch and I hate you.

Sorry. I didn’t mean to snap at you. It’s just that I’m a really sensitive artist. But you should definitely read my story. And tell the Marvel guys about it. I think it could be a really great way to start Phase 5.