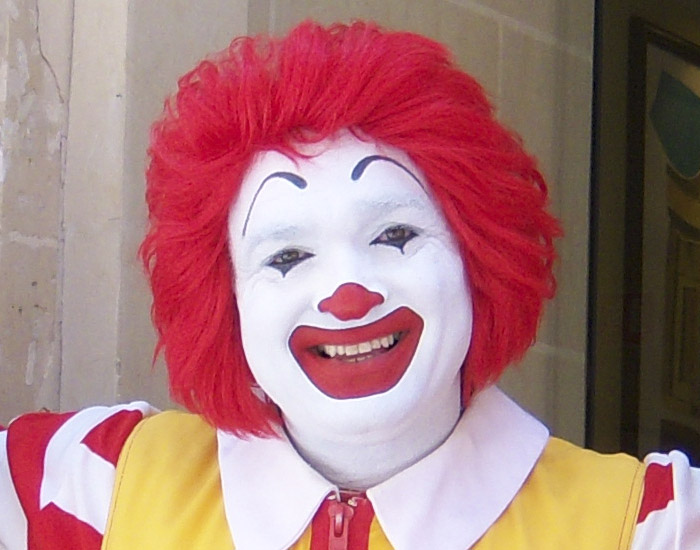 This shutdown has been rough for me. I literally have billions of burger patties and McNuggets that have been piling up in warehouses for months. Fortunately, most of our food never goes bad, but still, it’s been a logistical nightmare.

Most of our regular customers look and feel better than they have in years, and they’re beginning to put two and two together. They still miss our food, but they don’t miss the flop sweat on the toilet or the heart palpitations.

At this point, our food is pretty much out of their systems. They’re still addicted to soda, but no one comes to McDonald’s for the soda.

I’m still evil just like all clowns, but even I have my limits.

How do I get these people back, and do I even want to? And assuming I do want to change, what should I do? There aren’t many options for 57-year-old spokes-clowns.

I bet you wish you could blame the movie It for everyone’s hatred of clowns, but the truth is you’ve killed more people than Tim Curry and Bill Skarsgård combined. I’m not trying to plagiarize a 3-year-old internet meme here, I’m just stating a fact.

Throughout this pandemic situation, most McDonalds have been open for takeout, so if business is down that means one of two things; 1) People are waking up to the fact that Big Macs are basically poison, 2) there’s a statistically significant overlap between regular McDonald’s customers and COVID fatalities. As obesity is now known to be the single most prevalent pre-existing condition associated with coronavirus deaths, I’m inclined to believe the latter.

So what can you do to save the company? I’m no marketing whiz (I’ve got missionaries and televangelists for that) but the way I see it, there’s only one thing you can to do to turn things around: Bring back the McDLT. I know the McDLT was a colossal failure and one of the most embarrassing gaffs in company history (think New Coke) but that’s because people were idiots back in the ’80s. It was sheer brilliance to have a container with two separate sections so you could keep the meat “hot” while at the same time keeping the veggie toppings cool. Of course, the problem was that the whole package would be thrown under a heat lamp, making everything lukewarm like all the rest of your food. The other issue was, at the time, people were just starting to get “woke’ about the environment, and the McDLT packaging required twice as much Styrofoam as any other sandwich. So how do you solve these problems? Technology. Design a biodegradable box with two segments that have actual heating and cooling properties. The research and development for such an undertaking won’t be cheap, but it will be worth it. Seriously. The McDLT. It’s your only hope.

Or you could make the McRib a permanent menu item. That would work, too.

OK, this is going to sound fucked up, but I had a wet dream about you last night. The dream began with me in the middle of a burger heist with The Hamburglar, the Duke of Doubt from Burger King, and Wimpy from Popeye. Someone tripped a silent alarm at the burger factory and the four of us were hoofing it while you, Officer Big Mac, Popeye, and that fucking plastic-headed Burger King guy chased after us. Eventually, you cornered us in an alley. The Duke, Wimpy and I all surrendered, but the Hamburglar said there was no way he was going back to prison. He lost his shit and attacked Officer Big Mac, just totally eating the guy’s face off. Nobody had any weapons, so they weren’t able to pry him off until the officer was nothing but a meaty pulp.

Back at the station, you tell me there’s one thing I can do to make it all go away. I’m like, “Fuck you! I’m the fucking Devil. I’m here because I want to be here.” Then for 10 long seconds, we stare at each other like we’re about to kill each other. Then suddenly we’re making out hard, caressing each other’s faces, tongues deep down each other’s throats. We drop out of the camera frame and all you see is our clothes flying up into the shot.

Then it cuts to hard-core fucking. I suck you with intensity and lots of exaggerated head movement before bending you over the stolen hamburgers (we’re suddenly in the evidence locker for some reason) and ripping you a new asshole with my 12-inch barbed cock. Then the Fry Guys appear out of nowhere and pour scalding-hot Fench fry oil all over our naked bodies. It feels like bathwater to me, but it burns off all of your make-up, revealing you to be John Schnatter, that fucking Papa John’s asshole. At this point, I’m about to blow my load, so I pull out and spray you with Hellfire, which lights you up like a 15th Century witch. Then Grimace shows up and pisses Shamrock Shake on you to put out the flames. Once everything is cleaned up, we all have a laugh and feast on your corpse. All of us except The Hamburglar, that is—he’s still full from eating Officer Big Mac.

Then I woke up with my crotch on fire, because I really do ejaculate flames.