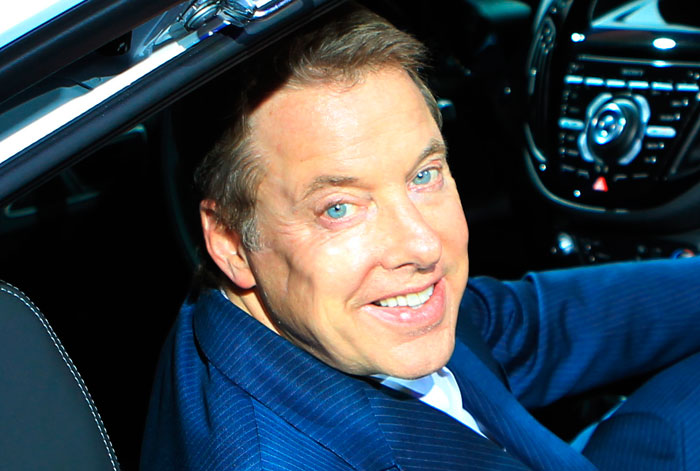 For the record, no, Trump did not wear a mask. For him, I think you’d need a gentle leader or a muzzle. Or maybe a choke chain.

Trump is worse than my Golden Retriever Zippy. Not only did he refuse to wear a mask, he kept licking the bumpers and chewing on the seats. He said robots made the cars anyway, and robots can’t get the virus, right? And if they can, you should hire better robots.

If I seemed exasperated when I spoke with the press, it’s because I was. I asked him to put on his mask at least a half dozen times, to stop playing with the machines and pushing all the buttons. I was this close to hitting him with a rolled up newspaper, but he’s somehow the President, and I don’t think I’m allowed to.

I’ve never met another human being like him. He’s like a punchdrunk dog, like Zippy has been ever since his head got run over by a gocart, except, again, even worse impulse control than Zippy, and Zippy eats out of the cat’s litter box.

I was drunk this morning (I’ve been drunk a lot lately) and my grandkids asked me why Trump is allowed to be such a stupid jerk and they aren’t, and I told them everything they’ve ever learned about sharing, being kind, admitting when you’re wrong, etc, is obviously wrong. You want to succeed in this world, you cram anything that will fit into your mouth, and if you want to touch something, anything, go ahead and touch it, and most importantly, be a completely oblivious mean-spirited asshole forever. They started crying, and I was 100% relieved.

Anyway, my question for you, which I wished I had asked a week ago: if one wanted to kill a public figure (hypothetically), how would he go about doing so? This person is protected, but you can tell the people protecting him hate him, but at the same time it’s their job, and you get the feeling they’d be happy to kill just about anything right now, even you, even though they secretly pray that you’ll somehow succeed.

Everything you’ve said about Trump is spot-on. And he’s right about the most important thing he’s ever said about himself: if he shot someone in the middle of 5th Avenue, his loyal subjects would still love him. In fact they want him to do that even more than they want him to build the wall. As long as the person he shoots is brown, or at least beige, and he’d get bonus points if the person had some kind of accent. I’ve said this before, but the only thing Trump could possible do to lose his devotees is stop being an asshole for five minutes. I’ve done the math and he needs to send a fucked-up tweet at least once every seven hours to keep their attention. If he misses two tweets in a row, he’s donzo.

The only difference between Trump and Zippy is the breed. Trump is a crazed Rottweiler kept on a very long leash by his master, Mitch McConnell. I wish that was a metaphor, but it’s the literal truth. Ever wonder why Donny’s skin looks so unnaturally orange and his hair looks like it’s been stapled in place? It’s because he’s really a dog wearing a rubber human suit. Whenever Mitch and his cronies are about to do something extra sinister, they beat Trump with a newspaper and refuse to feed him for a few days to make him extra aggressive, thus maximizing the distraction he causes. It’s a brilliant strategy because Trump is exactly the kind of dog his knuckle-dragging redneck base loves—the kind that hops the fence and takes a shit on the neighbor’s azaleas, then chews up their garden gnome. He also barks at black people for no reason.

Your question… is a good one, and believe me, you’re not the first person to ask it. Unfortunately, I have to tell you what I told everyone else. Putting aside the legal dangers of even talking about such a thing, there’s still the issue of his little deal with the Man Downstairs. I won’t go into details, but Trump has promised his soul in exchange for a long life and virtually limitless power. A deal’s a deal. But don’t worry—he’ll get his comeuppance eventually, and it’s going to be epic.

Unfortunately, what the Man Upstairs says about Trump’s deal is correct. If it’s any consolation, this is the first time in all my eons of existence that I’ve ever felt buyer’s remorse. Trump is such a winey little bitch that having him down here is probably going to be more torturous for me than it will be for him.

In the past, I’ve bragged about what I plan to do to him, and if you’re a regular reader of this column, you’ve heard all about the cobras in the rectum and the human centipede of which Trump will be the center. Six months into his first term as president, I realized it wouldn’t be enough. Nothing I can possibly do to him will balance out the damage he’s done and will continue to do over these next 50 years of his presidency. Technically, it won’t even be a “presidency” soon. Once all of his supporters die out (inbreeding never works out quite as well for American rednecks as it does for British royalty), he’ll realize he can’t win a fair election. When that happens, he’ll officially destroy democracy and become a dictator. By then, McConnell will be 118 years old, still in charge of the “Senate” and still shooting blue lightning bolts out of his hands. It will be a dark time. I like chaos, but not as much as I like fucking. I need to fuck, fuck, fuck all the time, and when I don’t, I get depressed, and when I get depressed, my horns fall off. It’s humiliating. Sure I could fuck demons, or bad people already in Hell, but it’s not the same. I need to be fucking people who have hopes and dreams—people who think they have a decent shot at getting into Heaven. The problem is, right now, everyone up there on Earth is feeling hopeless. Am I still getting laid? Sure, but not enough. And it’s going to get worse.

Sorry to bring you down. I know you wanted answers, and I probably just made things more confusing. On the bright side, Trump is still technically going to be punished. It might hurt me more that it hurts him, but he’s still going to have cobras crammed up his ass, and for those of you lucky enough to get into Heaven will be able to watch it all on a divine 50-foot screen. You’ll get to enjoy all the action without having to endure the flames and the horrible smells of Hell.