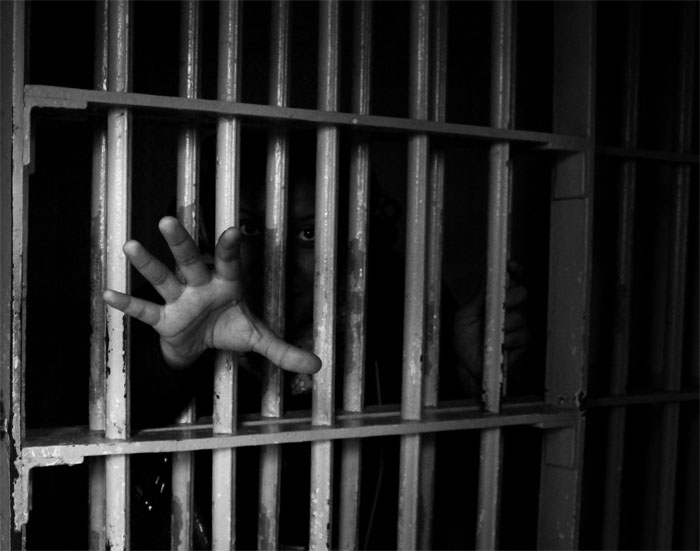 Whenever someone asks about crime I tell them it’s a lot more difficult nowadays because all of the phones, cameras and GPS, and all of the other new forms of technology. But looking at the way I actually live, this can’t possibly be true.

My life is basically a long string of crimes from ten or eleven to now. Perhaps it’s generational or locational, but the general consensus of just about everyone I know around my age is that you’d be stupid not to steal anything you could. Maybe I stopped thinking of most of these activities as crimes because they seemed so natural. Of course you should steal tapes or CDs or torrent movies and software if you could get away with it. I got caught shoplifting once or twice, and it cost me (actually my parents) maybe $500.00, compared with the thousands of dollars of cigarettes, video games, and alcohol I would have had to pay for.

I also had a fake ID, I used to drive drunk, and I jaywalk and litter everyday.

I was smoking outside with a non-smoker and when I flicked my cigarette away, he asked me how that wasn’t littering, and I told him that it clearly was, but there are just too many people littering. What would you have to litter in NYC to be ticketed for it? It would have to be something pretty disgusting and blatant, a combination of bad timing and egregiousness. I flick cigarette butts in front of police officers all the time and never even think about it.

I also buy, sell, and use illegal drugs. I’ve done so for years, and I’ve only been caught once during a sweep. That’s an example of bad timing. As long as you don’t wander around tweaked out causing other kinds of trouble, in general, no one will care. If it’s easier to just ignore you, you’ll be ignored.

Maybe telling people that crime would be close to impossible nowadays while committing crimes everyday is as much a function of self-preservation as it is self-deception. I started to make a list once of every crime I could remember committing and adding up all the fines, jail, and prison sentences I would have received if I was caught, and I quit halfway through because it served no purpose other than to potentially incriminate me and make me feel worse and worse. As I listed the multiple crimes, I remembered others. Stupid fights that could be considerd aggrevated assaults, injured people left on the street with no idea of their ultimate fate, large objects I’d left or threw into dangerous situations while I was drunk because I thought it was funny. Dozens of potential random negligent homicides, and the randomness, or my inability to ever accurately know or remember who or what or where, has protected me. I remember throwing an air conditioner onto the Westside Highway from my 5th floor apartment window, it smashed onto the asphalt and its momentum carried it off to the side of the road, but for every relatively “bad” crime I remember, there are three similar ones I vaguely remember, at least half a dozen more I don’t remember, and at least one I get the feeling I’m actively preventing myself from remembering, like the one time I threw an air conditioner and fell back into my apartment, then heard tires screeching and car crash noises. I would never check the day or week after, I wouldn’t even remember at all until months later, when I was drunk and about to throw another air conditioner onto the highway, the familiarity would bring something uncanny back to me, and by that time, the uncanny event was too far in the past to clearly remember or investigate. Was it a month ago, six months ago, a year? How old am I again? Do I really want to know the answers to any of these questions? I was either responsible for something horrible or I wasn’t, and if I was, I would either feel badly or not care at all, and most likely, as long as I didn’t have to suffer any externally imposed consequences, I wouldn’t care. Did I really want to confirm I was that kind of person? Almost all of us are definitely that kind of person. We might feel a little guilty for a little while, but as long as we aren’t caught or punished, it doesn’t really bother us at all. The thought of accidentally killing a stranger bothers me less than the thought of losing my keys or my wallet. Maybe that makes me a bad person, but since I can never really be sure of whether or not I ever really hurt or killed anyone, I’ll never really know. Really knowing would make it different. If the police claimed to really know, I would deny it, whether I really knew or not.

If I have killed anyone by accident, it was probably unintentional, all of the tossed air conditioners notwithstanding. I get the feeling, or I at least tell myself, that if one of those air conditioners had killed someone, I would somehow know it, and since I’m at best unsure, it probably didn’t happen, and most would be inclined to agree with me because of what we believe about phones and technology, even though these beliefs are obviously untrue. It seems unthinkable that a drunk might randomly kill a stranger, or strangers, and get away with it, that the police wouldn’t differentiate the air conditioner parts from the car parts in the wreckage and take prints, or find whatever DNA I might have hacked up into the air filter. But I would get away with it because it was so random, and for the police and everyone else involved, it would be easier and more profitable to just call it an accident. Even if they could prove I had touched the air conditioner, why would I carry it up five flights of stairs just to throw it out onto the highway? It just doesn’t make any sense.

They say that luck smiles on drunks and idiots, but that’s probably because drunks and idiots give luck a lot more chances. Just as often, it’s been me left bloody on the sidewalk to either go to jail or the hospital or both, or me having to swerve because of some random piece of junk seemingly instantaneously appearing right in front of me on the highway.

I probably want to kill people I know, but instinctively, I feel the only safe way to do so is randomly by accident, so to give myself the best possible chance, I create as much chaos as possible, a Rube Goldberg device of anarchy and destruction with the vague, unfocused hope that my blind carnage will eventually spread outward to hobble and ensnare all of the people I want to hurt. These kinds of systems require a lot of external energy, it would undoubtedly be safer and more ethical to just surgically strangle, maul, or stab whoever it is I actually want to kill, but I’m not really sure of that, or of any of this, either.

Some will undoubtedly suggest that it’s really me I want to hurt, because that too is a part of the gibberish a lot of us generally believe. If I loved myself, I wouldn’t wander into the boiler rooms of seemingly random buildings flicking switches and turning valves, a happy, well-adjusted person just doesn’t do that sort of thing, supposedly, but even if that were true, it doesn’t necessarily follow that I want to hurt myself? It seems more likely that I want to hurt other people, anyone or everyone as long as it’s not me. For the common good, I should hurt myself, but I’ll never deliberately do so, and if someone caught me in the act or tried to stop me, I would have to kill them and I would consider it an accident, or bad timing or decision making on their part. What they should have done is used their phone to take a picture or call the police, it wouldn’t have worked and everyone would have been happy.

Knowing for certain is worse than the actual murdering, or at least I imagine. You’d have to be prepared, however unlikely, to defend yourself against accusations of murder at a moment’s notice, while not knowing makes it almost impossible to worry. It’d be like worrying about a donkey you stabbed in a dream.

I started wandering into boiler rooms because of an apartment I lived in on the Upper East Side. It was an old, relatively shitty building and the alarm in the boiler room was always going off and no one would ever turn it off. One night, tired of listening to the alarm, I wandered down toward the noise and found myself in the boiler room. A red light was flashing as the alarm blared, there were valves and buttons and one bright red button, and a sign that said “DANGER! DO NOT TOUCH ANYTHING IN THE BOILER ROOM. IF THE ALARM GOES OFF, CALL THE SUPER AT 212-XXX-XXXX.” So I walked up to the red button and pushed it and there was a whooshing noise, and the boiler turned back on and the alarm stopped.

About a week later, the alarm started ringing again and kept on ringing for nearly an hour. This time, the red button did nothing, so I followed what looked the power cord, a cord wrapped in ringed steel, to a fuse box. There was a sign on the fuse box that said “DANGER! DO NOT OPEN. AUTHORIZED PERSONNEL ONLY,” so I opened the fuse box and flicked the switches one by one until the alarm stopped.

As the months passed, I presumed that the alarm went off because the pilot light kept going out. The boiler room smelled like gas, but it always smelled like gas, but then again, the only time I was ever down there was when the alarm was going off. The red button must have lit the pilot light, and if that was the case, we would all be better off if I pushed it as soon as possible, so I stopped pushing it. From then on, I just killed the power. Pushing the button when the room might have been full of flammable gas seemed really dangerous, like the sign said, but if it really was that dangerous, there should have been locks. The boiler room, the fuse box, and the red button should have all been locked up safe. As it was, a medium-sized dog could accidentally push the button. I wondered what they would do to the dog if they knew it blew up the building, it seemed like they would have to put it down. Someone would have to pay, even if it was just a stupid dog.