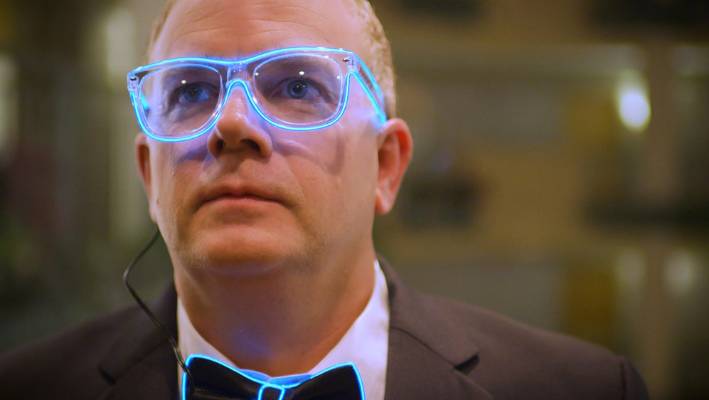 I’m a moviestar thanks to the Netflix documentary Behind the Curve and I’m practically a hero now. A brave, reluctant hero who had the guts to blame being a virgin on the entire world being rigged against him. It’s all a scam, man!

For every kid who was ever told that 3 times 5 doesn’t equal 19 or that Columbus didn’t ride a wooly mammoth when he discovered Australia or that girls don’t have cooties, Mark K. Sargent is there to say why not?

Flat earth theory is the “fun” conspiracy theory. We sing songs about the earth being flat and mock the ancient Greeks who somehow managed to discern more about the nature of reality with twigs and wells than we can with 21st century technology. Everything that disagrees with us, like pictures of the earth taken from outer space that literally show that the earth is round, is obviously fake. Do you honestly believe that moon landing footage? Bad CGI, man. NASA, GPS, the moon landings–all of mankind’s greatest achievements are a scam, the best and brightest of humanity are all fakers and liars, and most of our followers are also antivaxxers, mass shooting deniers, and 9/11 truthers, but aside from that, it’s “fun,” and not at all cynical, delusional, or detrimental to humanity.

Our basic argument is for equality. We believe that dumb, lazy kooks are just as good as astronauts, engineers, and people who actually make the world work. That’s all we’re really trying to say.

And that we’re special. Because if the earth really is just a speck of dust hurtling through oblivion, that would mean that life is no more meaningful than we make it for each other through reason and honest self reflection. And if that’s true, you might as well start baptizing dogs, right?

We consider ourselves a scientific movement, but the bible is the OG scientific document, and the scriptures have got to be with us on this one, right? The whole delusional, believing in whatever makes you feel better and slamming whatever doesn’t, you guys practically invented it. I’m the founder of this part of the movement, but I’d be happy to add your names to the charter.

Thank you in advance for finally setting the record flat.

Boy, your letter has really turned me around on this issue. I have to admit, I was going along with the mainstream for a while, but the facts you present are really hard to argue with. The truth is, I was trying to make the Earth round, but spheres are really difficult to construct. I guess, in this case, I didn’t pull it off. I got the moon right, at least. And all the stars and other planets.

Or did I? For all I know, the moon is just a flat disc turned on its side. Maybe I should just destroy the whole solar system and start from scratch. I kind of always wished I had made the Earth purple and yellow instead of green and blue, like Planet Fitness. Is that even a real planet? I feel like I should know the answer to that but I don’t. I know they offer free pizza on the first Monday of every month and free bagels the second Tuesday. Maybe I’ll move you all to Planet Fitness while I’m rebuilding the Earth. With the obesity epidemic what it is today, it’ll probably do you all some good. Just don’t grunt or drop the dumbbells—you’ll set off the lunk alarm.

Actually, it’s probably better if I just kill all you ignorant, ungrateful assholes and focus on a different species next time. Maybe I’ll help Tardigrades evolve to have super intelligence. Wouldn’t that be fun? Those tough bastards can live practically anywhere—flat planets, round planets, donut-shaped planets. Their durability would really take the pressure off me in case I fuck up again.

If getting you laid would solve this, I’d help make it happen. But we’re past that now. The conspiracy theorists and the flat Earthers have joined corrupt politicians in what has turned into a dangerous misinformation fad. When you were just a small band of ugly losers living in your parent’s basements, you provided harmless amusement. But now you have real influence and are posing a genuine threat to civilization. You’re making noises that can’t be dismissed or tuned out, and you’re doing it out of hate and bitterness and a desperate need for attention.

And that means I have to carve out a whole new section of Hell for you guys. Don’t get me wrong—I like having new kinds of souls to munch on. But this is going to be a lot of work for me. Obviously, your tortures will involve castration and sexual humiliation. But I have to be careful because most of you actually get off on that stuff. I have to strike the right balance between physical pain and psychological torment. Many of the tortures will no doubt center around parental disappointment, Oedipal complexes, and ridicule from your much more successful siblings. There’ll be a lot of pointing and laughing at your small dicks from the women who rejected you. It certainly does make it easier for me that most of you conspiracy nuts are men. In this regard, other kinds of liars present their own unique challenges. For example, I still haven’t figured out what to do with the Sarah Huckabee Sanders-types who don’t have small dicks to laugh at.

Maybe I’ll just give them small dicks to laugh at.