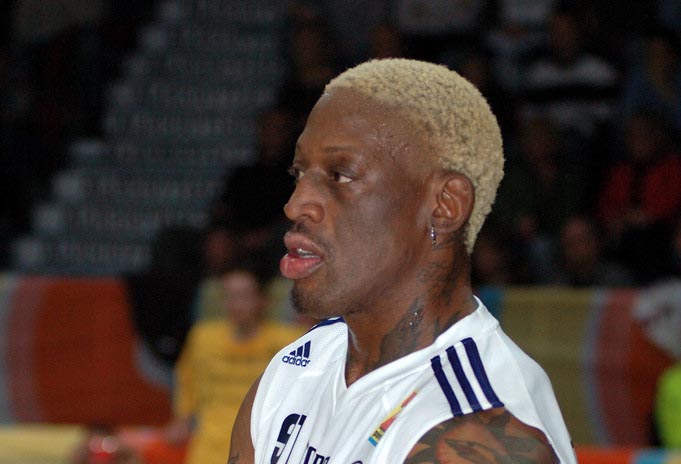 I fucked Madonna. No matter what you think of her, no matter how freaky and creepy she looks nowadays, she’s a crazy little five foot nothing white girl and I’m an enormous black guy. To me, that says something great.

I’ve never been the most stable guy, and now I’m the only American ambassador to North Korea. It’s heavy, dude. Or dudes. I’ve been under pressure before. I played on championship teams for Detroit and Chicago, but I had people like Isiah Thomas and Jordan and Pippen helping my ass. I knew my role. What I’ve got now is D. Trump.

Despite the drugs, alcohol, being black, cross dressing, whatever you want to judge me for, believe me when I tell you, I’d rather have any one of those other guys as president. I’d rather have John Starks.

Maybe it sounds like treachery and shit, but my boy Lil’ Kim, he talks about wanna kill D. Trump, and I agree with the mutherfucker. D. Trump, he has good taste in bitches, I’ll give him that. If I had a daughter that looked like that, it’d be hard not to wanna hop on that shit. But president? Man, it takes more than that to be president.

Believe it or not, I expedited Jordan and Pippen. I made that shit work. They got too out of control, too mad at each other, I’d do something stupid and they’d be mad at me. It’d fix it. But in this case, in my current ambassador shit, I can’t do it. I trusted Jordan and Pippen, but there’s no way in hell I can trust either of these new mutherfuckers. Lil’ Kim is crazy, man. He has Barbie Dolls and shit. I know it’s another culture, but I think it’s just him. And D. Trump? You already know.

You answer bitchy little white dudes like Matt Damon about stupid shit all the time. Man, nuclear weapons are involved in my shit. I didn’t ask for this. I just got drunk for a few years and it happened. Dennis Rodman is your only hope in North Korea. Think about that for a second, then help me you mutherfuckers!

I’m not exactly sure what I’m supposed to say here, since you didn’t ask for anything specific. Are you looking for Me to pop down there myself and arrange a summit between Kim and Trump? Because you know I don’t like to get directly involved in these kinds of things. The only human endeavor I ever get directly involved with is sports. Since you’re retired, your days of having your prayers answered are behind you. If it’s advice you want, I’ll give some. If it’s forgiveness for the time you kicked that cameraman in the nuts during a game, I can do that. I’ll even forgive all the fornication. But if it’s world peace or some other hippy bullshit you’re hoping for, well, you ungrateful humans are going to have to do that shit yourselves.

Not to steal your thunder, but I fucked Madonna, too. I mean, of course I did, right? Her name’s Madonna. I fucked all the guys from Judas Priest, too. I’d fuck a guy named Moses if he ever got famous enough. Jesus Jones—that’s a little too on-the-nose, but you see where I’m going with this, right? Anyone with a Biblically significant name ends up with my dick in one of his or her holes. Do I do this just to annoy the Man Upstairs? You know it.

While we’re on the subject, there’s another way I’d like to mess with him. See, he’s been seeing red lately. He’s getting trigger-happy with his Apocalypse. Well, I’d love nothing more than to ruin this for him. Now, he’s been talking all this nonsense about robots becoming sentient and wiping out humanity, but I think that’s just a distraction. I know he’s had a hard-on for nuclear war since the 1950’s. He likes the way those mushroom clouds look from Heaven. Also, I’m not sure he’s completely confident that the robots can really pull it off. So as he’s been watching this North Korea business unfold, he’s been talking to his Four Horsemen and making sure they’re ready. And I know nothing would piss him off more than if all the tension blew over and everyone in the world just went back to their casual sinning like nothing ever happened. Will you help me make this happen? Call up Kim, tell him you want to pop over for a visit and that you’re bringing a friend. Meanwhile tell The Donald you have a surprise for him involving Russian hookers with full bladders. I think you’ll be able to figure out the rest. I know this kind of thing is stressful but I’ll totally make it worth your while. You want to fuck the 1985 version of Madonna? She’s yours if you want her. Or how about getting your 25-year-old body back, coming out of retirement and winning 5 more NBA championships on any team you choose? I can do that for you, too. I can even arrange for whichever team it is to change their names to The Dennis Rodmans. How does that sound? Take some time to think about it, but not too long. You know better than anyone just how crazy these two assholes are.