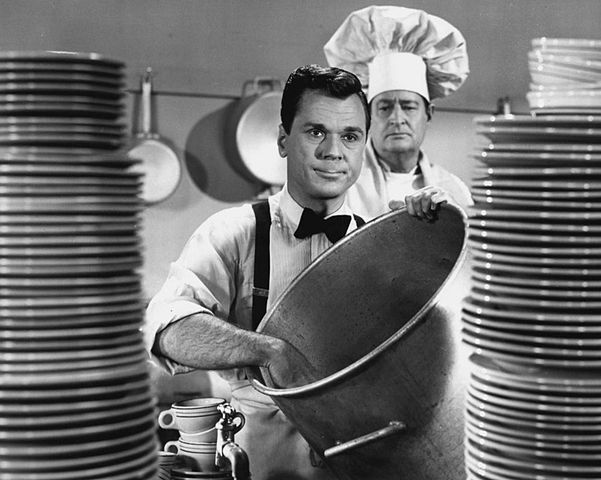 9 a.m. to 6 p.m. My first day on the job. I heard the dishwasher I was replacing arguing with a female supervisor. He had worked from 6 p.m. to 9 a.m. and she was claiming that he had only worked for three hours. He protested sadly. Being a poor, black, 40 some odd year old dishwasher, he knew he was going to lose.

The Sheraton Hotel. Of all the dishwashing machines I had ever encountered, this one was the largest and meanest. The water was never below boiling. No plastic gloves were supplied.

The first hour wasn’t bad. There were no dishes. Only a few pots and pans. I took care of them and smoked cigarettes. The chef approached me and ordered me to skin potatoes. He was a small, greasy looking man. I skinned potatoes, smoked cigarettes, and listened to the radio. For $7.00 an hour, I could wake up and do this.

Breakfast was served until 10 a.m. The dishes didn’t arrive at my station until 11. Bus buckets stacked to the ceiling, column after column on cart after cart were wheeled toward me, boxing me in. The cook yelled at me to collect and clean his pots and pans first so he could start lunch.

The chef wasn’t much of a person or a chef. The bus buckets were overflowing with food, nearly every plate had a full meal, minus a bite or two, still on it. I had to take the garbage out to the dumpster every five minutes, huge waterlogged cans of eggs, coffee grounds, cigarette butts, napkins. My hands were burned and my back creaked. The dishwashing machine roared and clanked. Every 10 or 15 minutes it would jam and I’d have to reach inside and find whatever was jamming it. Usually it was a loose fork deep in the boiling water. A hand could only survive for a few seconds in there and I could never get the fork out on the first try. The chef would scream at me “I need those pots! I need knives!” The knives and the remaining pots were buried, and the stacks of bus buckets kept coming.

As the other end of the dishwashing machine became crowded, I reloaded the chef’s station as was my duty. Steaming hot stacks of plates, scalding frying pans. I put his knives back in their drawer face up and backwards. Back at my station a few minutes later, I heard him scream. He slipped across the wet tiles toward me and maneuvered himself between two stacks of bus buckets.

“Did you reload the knives?”

I stared at him.

We slipped and staggered back toward his station and he pulled open the knife drawer.

“This is the proper way to reload the knives.”

He pulled a knife out and started to turn it around.

“Hey, this knife is filthy!”

He pulled out a few others in disbelief.

Blood from his hands started to leak through his band aids.

I walked away from him and into the break room. There was a walk-in cooler connected to it so I went in there to cool off. There were several large buckets of ice cream on a shelf. I opened one and sank my ruined hands into it. My poor hands, blistered and sopped. When I made a fist water dripped from it. The ice cream made them feel better. I crammed a handful into my mouth, it was too cold, it hurt my teeth, most of it dribbled back into the bucket. I closed it up and returned to the kitchen.

My station had become a junkyard of glass and filth. All of the water glasses and coffee cups from breakfast. It was hopeless.

A retarded janitor stutter-stepped by trying to carry a half-keg of beer. He was strong enough to do it, but the wet floor made it treacherous. I wandered over to him and grabbed a handle to help him.

“Where the hell do you think you’re going?”

I ignored the chef. When I returned to the kitchen, I took off my apron and threw it on the floor. My shirts, pants, and shoes were drenched in sweat and filthy water. I smelled like a bare hand might after it’s done unclogging a particularly nasty toilet. I found the supervisor’s office in a slightly cooler, cleaner corner of a prep area.

She was used to this. She didn’t even bother to argue.

“It won’t be ready for two weeks.”

“I never want to see you or this place ever again.”

She turned around to shuffle some papers on her desk.

My parents yelled at me to get another job. There was only a week left of summer vacation, it seemed pointless to me, but they kept at it, “you’re old enough to work”, “so when you gonna get a job?” Being unemployed was bad enough without that. Fortunately a Taco Bell was opening up in my town.

I was hired immediately and given unstainable gray pants and a striped yellow and turquoise tennis shirt. Once I was in uniform, they shuttled me to an already functional Taco Bell a few towns over to learn the ropes. The first day was fine. A couple of the other recruits and I sat in a back room and watched instructional videos, “This is how you make a Chicken Meximelt” and “This is what you do if there’s a robbery” and “When greeting customers, smile pleasantly and say ‘Hello, my name is (state your name), welcome to Taco Bell! How may I help you today?’” I learned how to work the registers and prep and breakdown the stations, my manager noticed where my talents lied, I spent most of my taco career behind a steaming sink. They didn’t have any dishes or pots and pans, but there were always plenty of vats and food gutters that needed to be hosed off and scrubbed.

Opening night was a madhouse. Everyone in my town must have been thinking “I wonder what that new Taco Bell thing is?” The first week was by far the busiest and the taco people played it like pros. Large helpings, untainted meat and foodstuffs. In the weeks to follow both the quality and the quantity of the food would deteriorate.

Drive through was my favorite duty. I gave everyone I knew loads of free food. I ate the food myself. Sometimes I would reach into a vat of meat and scoop a handful into my mouth. The manager caught me once, we just stared at each other. I didn’t care. Nobody cared.

A lady came through the drive through regularly, she was at least 300 pounds, we recognized her sinister looking blue van. She’d pull up to the menu and start talking at no one, “I’d like two Mexican Pizzas, half a dozen Soft Taco Supremes, five Chicken Meximelts, two Bean Burritos Supreme, a large Fribble – “

“Ma’am, you’re thinking of Wendy’s, down the street.”

“Oh, make it a Steak Burrito Supreme instead, and a large diet 7 Up.”

I’d punch in her order and the kids on the food line in the back would holler.

“Is it that fat lady again?”

“How do you make a Chicken Meximelt?”

“How long have you been here, three months? And you still don’t know how to make a Chicken Meximelt?

Her van was always loaded with refuse from McDonalds, KFC, Wendy’s, greasy empty tubs and wrappers. It looked like I was handing her a week’s worth of groceries.

Our eyes locked. I had broken the illusion, that this meal might be for more than just one person. I smiled like the guileless idiot that I was and blamed the damn instructional videos. They had turned us into automatons. A vampire could drive through and order a Decapitated Head Supreme and I would start punching it into the register, “BURRITO + BEEF + SUPREME SUBSTITUTE ‘BEEF’ with ‘DECAPITATED HEAD’”, the lines people would build it for me and I’d hand it out the window as I uttered something idiotic like “Enjoy your meal.” After the fat lady killed me and ate me she’d mark my empty grave with a headstone that read “Enjoy your meal.” I laughed as I thought about this and the fat lady shook her head and drove away.